Scientists at the Centre for Ecology & Hydrology (CEH) predict that climate change may well lead to a widespread invasion of harmful ragweed across Northern Europe in the next 60 years unless its path is halted by policy-makers. 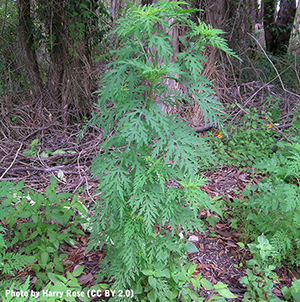 Researchers at CEH have produced a scientific model – which is able to take account of the effects of changes in temperature and length of exposure to daylight – to see how in future ragweed could spread as far as central UK and Ireland, Denmark, southern Sweden and most of the southern Baltic coast.

Ragweed (Ambrosia artemisiifolia) is a serious concern because of its harmful effects on agriculture as a crop weed but also on public health as a major allergen. A single plant may produce a billion grains of pollen per season – pollen which may remain airborne for days, affecting people hundreds of miles away.

Those sensitive to ragweed pollen can suffer itching, burning, and swelling of the mouth and throat, runny eyes and nose, hives, and, less commonly vomiting, diarrhoea, asthma and anaphylaxis. It also affects crop production as a weed.

Lead author Dr Daniel Chapman and Professor James Bullock, ecologists at CEH, led an international team of researchers who found that ragweed’s ability to adapt the timing of its lifecycle means the invasion may extend northwards and increase the average suitability across Europe by 90 percent in the current climate and 20 percent in the future climate.

Dr Chapman said, "This work shows that ragweed is adapting to cooler conditions than were previously thought to be suitable for its invasion in Europe. Building this effect into our models shows how much wider areas may be at risk of its serious impacts."

Professor Bullock said, "By combining powerful models with experiments across Europe, we have been able to improve our predictions of the spread of this harmful invasive." 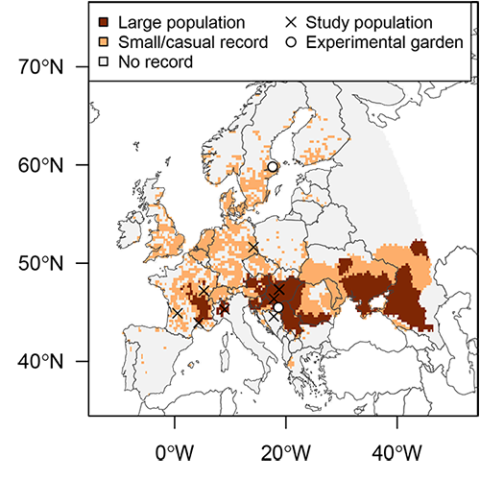 Map: Non-native distribution of common ragweed (Ambrosia artemisiifolia) in the modelled region of Europe (records from 1991–2010 on a 0.25° grid)

"This work shows that ragweed is adapting to cooler conditions than were previously thought to be suitable for its invasion in Europe. Building this effect into our models shows how much wider areas may be at risk of its serious impacts." Dr Daniel Chapman, Centre for Ecology & Hydrology

The scientists say that eradicating or restricting the spread of ragweed from isolated established areas of growth in northern Europe must be a management priority to avoid ragweed’s potential to further impact on agriculture and public health.

The research, published in the journal Ecology, was conducted in collaboration with Dr Romain Scalone of the Swedish University of Agricultural Sciences and Dr Edita Štefanić of the University of Josip Juraj Strossmayer in Croatia.

The study was funded by the European Commission, the Natural Environment Research Council (NERC) and Svenska Forskningsrådet Formas.