“The nitrogen cycle is changing faster than that of any other element.” United Nations Environment Programme. 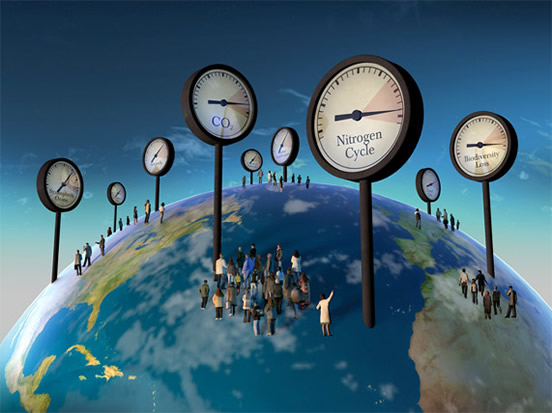 An international group of scientists say there is an immediate need for a global assessment of the nitrogen cycle and its impact on climate.

On a planetary scale, human activities, especially fertiliser application, have more than doubled the amount of reactive nitrogen in circulation on land. This massive alteration of the nitrogen cycle affects climate, food security, energy security, human health and ecosystem health. The long-term consequences of these changes are yet to be fully realised, but the human impact on the nitrogen cycle has so far been largely missed in international environmental assessments.

Nitrogen’s role in climate change was highlighted at an event on 7 December at the COP15 United Nations Climate Change Conference in Copenhagen. Event organisers called for a new assessment of nitrogen and climate, which will identify innovative nitrogen management strategies for global climate change mitigation and associated co-benefits to society.

Dr Cheryl Palm, the chair of the International Nitrogen Initiative (INI), which organised the event, said “Nitrogen and climate interactions are not yet adequately included in the Intergovernmental Panel on Climate Change assessment process. There is an urgent need to assess the possibilities of nitrogen management for climate abatement and at the same time increase food security, while minimising environmental and human health impacts.”

The INI team believes that it is essential to untangle the complexity of the nitrogen and carbon cycle, identify the advantages of nitrogen management for climate abatement and investigate the costs and barriers to be overcome. Such an assessment needs to distinguish between developed areas, where there is already an excess of nitrogen, and the developing parts of the world where nitrogen management can help increase food security. Improved nitrogen management will help limit fertiliser use, increase its efficiency and increase carbon sequestration in soils, decrease N2O emissions, while limiting other environmental and human health impacts.

Dr Mark Sutton of the Centre for Ecology & Hydrology, Director of the European Centre of INI, and Co-Chair of the UN-ECE Task Force on Reactive Nitrogen, which is currently completing the first European Nitrogen Assessment (ENA), said, "Nitrogen is causing a web of interactions that affects all global change threats. In the ENA we have made the first steps to linking these issues. The next stage must be a global nitrogen assessment that addresses each of the climate, pollution and biodiversity challenges."

The side event, "Options for Including Nitrogen Management in Climate Policy Development", was followed by a networking reception supported by the Centre for Ecology & Hydrology (CEH). The organisers of the side event were the INI, CEH, the Ministry of Housing and Spatial Planning and Environment (VROM) of The Netherlands, the United Nations Environment Programme - Global Partnership on Nutrient Management (UNEP/GPNM), the David and Lucile Packard Foundation, SCOPE, the International Geosphere-Biosphere Programme, COST and the European Science Foundation Nitrogen in Europe Research Networking Programme (NinE-ESF).

Kilaparti Ramakrishna, Senior Adviser on Environmental Law and Conventions at UNEP, who gave the opening address at the side event, said, “The nitrogen cycle is changing faster than that of any other element. In addition, the effects of reactive nitrogen are not limited to a single medium. A single molecule of reactive nitrogen may transition through many forms - ammonia, nitrogen oxide, nitric acid, nitrate and organic nitrogen – and may successively lead to a number of environmental, health and social impacts, including contributing to higher levels of ozone in the lower atmosphere. Over the last decade a number of global, regional and national initiatives have identified and addressed the issue of nutrient enrichment to the coastal zone.

"However, programmes are dispersed and fragmented and there is no single place to go for an overview of available information tools and mechanisms.”

INI is a scientifically independent global organisation of scientists linked to the Scientific Committee on Problems of the Environment (SCOPE) and the International Geosphere-Biosphere Programme (IGBP) with regional centres in five continents.

Dr Mark Sutton of the Centre for Ecology & Hydrology is Director of the European Centre of INI, and Co-Chair of the UN-ECE Task Force on Reactive Nitrogen. For all media inquiries please contact the CEH press office.

The nitrogen side event at COP15 was organised by the International Nitrogen Initiative and the UK’s Centre for Ecology & Hydrology. For more details, read CEH scientist Clare Howard's article about the event (opens in a new window).