Colonies of gannets maintain vast exclusive fishing ranges despite doing nothing to defend their territory from rival colonies, scientists have discovered. 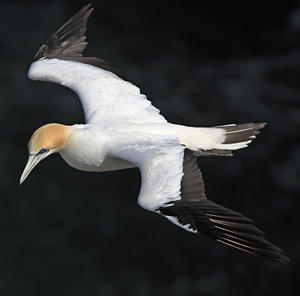 A team of researchers, led by the University of Leeds and the University of Exeter and including Professor Sarah Wanless of the Centre for Ecology & Hydrology, observed that northern gannets, which can fly hundreds of kilometres on a single fishing trip, avoided visiting the fishing grounds of gannets from neighbouring colonies.

The findings, published this week in the journal Science, could transform our understanding of animals’ foraging patterns because individual gannets do nothing to enforce this territory or communicate its boundaries when out at sea. A bird entering from a neighbouring colony would be free to fly and fish unhindered.

Co-lead author Dr Ewan Wakefield, from the University of Leeds’ Faculty of Biological Sciences, said, “The accepted view is that exclusive foraging territories are associated with species such as ants, which aggressively defend the feeding areas around their colonies, but this opens the door to a completely new way of thinking about territory. We found the gannet colonies also had neatly abutting and clearly defined feeding areas. Gannets may be a byword for gluttony but, clearly, they don’t eat off each other’s plates.”

Researchers from the UK, Ireland and France tracked the flights of nearly 200 northern gannets flying from 12 colonies around the British Isles.

Rather than seeing criss-crossing flight paths as the birds headed out from their colonies, they found themselves plotting a strictly segregated map. The most striking example was seen off the west coast of Ireland where gannets from two colonies, Bull Rock and Little Skellig, are within sight of each other yet head off in different directions.

The explanation has nothing to do with territorial behaviour, but instead seems to be a matter of mathematics reinforced by the culture of colonies.

Dr Thomas Bodey, from the University of Exeter, joint-lead author of the study, explained, “Gannets get their chance when shoals of fish are forced to the surface, often by predatory whales and dolphins, but when the gannets start plunging into the water and feeding on a shoal, the fish start diving. You have to be one of the first gannets to get there and that is where the maths comes in: if you go into an area that is being used by birds from a closer colony, there is a higher chance that individuals from that colony will be there first." 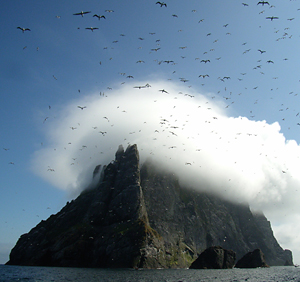 Cultural transmission within the colonies seems to reinforce the geographical calculus. "Gannets readily follow each other when at sea. Finding such separation between colonies, even when visible from each other, indicates that competition for food cannot be the only explanation and suggests cultural differences between colonies may be important.  As with humans, birds have favoured routes to travel, and if new arrivals at a colony follow experienced old hands then these patterns can quickly become fixed, even if other opportunities potentially exist," Dr Bodey said.

The northern gannet is Europe’s largest seabird, with a wingspan of around 2m, and nests on steep cliffs and rocky islands. Attaching the matchbox-sized satellite transmitters and GPS loggers used to track the birds was sometimes a major challenge, even involving a military abseiling team at the UK's biggest mainland colony, Bempton Cliffs in East Yorkshire.

CEH's involvement in the project took place on St Kilda NNR. Prof Sarah Wanless explained, "This was a hugely exciting collaborative project to be involved in. CEH's contribution was satellite tagging gannets on the St Kilda NNR, the largest and remotest colony sampled. These gannets made some of the longest foraging trips recorded but nevertheless there was virtually no overlap in the area they used with birds from the neighbouring colonies on Ailsa Craig and Sule Skerry."

The UK supports between 60 -70 per cent of the world’s northern gannets and the discovery that colonies depend on particular sea areas has implications for the location of marine protected areas and offshore energy development, as well as wide ranging implications for our understanding of animal behaviour.

Professor Stuart Bearhop, Professor of Animal Ecology at the University of Exeter, said, “We understand an awful lot about what these seabirds do on land, but until recently we knew shockingly little about what they do at sea. The technology is now allowing us to leave the coast with them and we are discovering more and more of these amazing and unexpected patterns.”

Professor Mark Bailey, Director of CEH, said, "This study is a clear demonstration of how collaboration by many different research institutions, supported in part by CEH's National Capability funding, has led to world-leading science. This result could not have been achieved by working in isolation."

The work was funded by the Natural Environmental Research Council, the Department of Energy & Climate Change, the Centre for Ecology & Hydrology, the Centre National de la RechercheScientifique, the Ligue pour la Protection des Oiseaux, the Alderney Commission for Renewable Energy, the Beaufort Marine Research Award and the European Union. It involved the Universities of Leeds, Exeter, Plymouth, Liverpool, Trinity College Dublin and University College Cork, as well as the Royal Society for the Protection of Birds, Centre for Ecology & Hydrology and the Centre National de la Recherche Scientifique, France.

The University of Leeds issued a press release for this story.