A new map of the places in Scotland that offer good habitats for one of the most invasive kinds of rhododendron may help control the spread of Sudden Oak Death, a disease that threatens trees and plants like oak, beech, larch and bilberry. 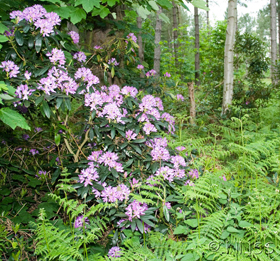 Scientists divided the country into kilometre squares, and created a model to predict how suitable each is for Rhododendron ponticum, also known as the common rhododendron. It incorporates a variety of factors including climate, elevation and soil moisture.

They then compared the results with data from field surveys; the two generally agreed well, so the model's predictions are likely to be accurate. It turns out that more than half of Scotland's native woodland coincides with good conditions for rhododendrons and so could be at heightened risk of disease.

Ecologists have modelled how this rhododendron species spreads locally before, but this is the first attempt to look at a whole country. Because Rhododendron ponticum is an important reservoir host for sudden oak death and related pathogens, the map will help policy-makers concentrate efforts to control both plant and disease in places that are at most risk. This is a step towards a unified map of the risk of outbreaks across the country.

"We set out to produce this country-wide map of hosts for this disease because when there's been an outbreak in trees, it usually turns out that it has come from contact with rhododendrons nearby," says Dr Bethan Purse, an ecological modeller at NERC's Centre for Ecology & Hydrology and the study's lead author.

"Rhododendrons are an established problem, but the fact they also act as a reservoir of disease means another layer needs to be added to the planning process," she adds. "We hope our work will help policy-makers put the resources that are available for rhododendron control to work where they will do the most good."

The model shows that low-lying broadleaved woodland with moist soil is particularly vulnerable to rhododendron infestation. Low levels of soil carbon and limited pressure from grazers were also associated with higher risk. And rhododendron infestation overlaps a lot with native woodland, adding to concern that the invasive shrubs will transmit disease to the trees. So it could be wise to focus rhododendron-clearing budgets on places where the invasive plants are growing near to relatively unspoilt native woodland, valuable tree plantations or woodland restoration initiatives.

Rhododendron ponticum was introduced to Britain from mainland Europe as attractive garden plants, but they quickly escaped into the wild and became a serious problem. They colonise whole hillsides and create such dense shade that tree seedlings can't establish themselves. Clearing them is expensive, in some cases costing tens of thousands of pounds a hectare.

But there's more; one invasive species is now paving the way for another. Beyond being obnoxious in their own right, rhododendrons also give the family of fungi-like pathogens behind sudden oak death and other Phytophthora diseases a way to spread quickly and stealthily across the countryside. The plants are highly susceptible but might not show any symptoms, so the disease can be hard to spot outside the lab. And because rhododendrons cover such wide areas so densely, it's easy for spores from an infected plant to make it to new hosts.

The Sudden Oak Death pathogen Phytophthora ramorum is spreading all over mainland Britain and to islands such as Arran, while the closely-related Phytophthora kernoviae occurs in patches of Scotland, Wales and southwest England. These pathogens could prove catastrophic from both conservation and economic points of view - for instance Japanese larch, one of the most susceptible species, is a common and valuable tree in Scottish timber plantations.

Larch is a particular problem because once infected, it lets the pathogens produce vast numbers of spores, helping it spread far more widely. "There's a risk of a double whammy with two hosts in the same place," Purse says. Other plants such as juniper and bilberry have been badly affected by Phytophthora pathogens, and provide food and shelter for endangered bird, mammal and insect species.

The group is now extending their modelling work to cover other potential hosts, with the aim of producing a unified framework for Scotland that decision-makers can use to understand the overall risk of Phytophthora outbreaks in different places. By the end of April they will have presented a report to the Scottish government with maps that colour-code woodland and heath according to a risk score of infection, arrived at by looking at the kinds of host plants and climate conditions present, as well as roads and rivers that could give the disease easy access. Policy-makers and land owners and managers will be able to download them, zoom in on areas of particular interest and target efforts at disease surveillance and control accordingly.

The paper, which arises from a Scottish Government-funded collaboration between CEH, St Andrews University, Forest Research and Science and Advice for Scottish Agriculture (SASA) appears in Biological Invasions.