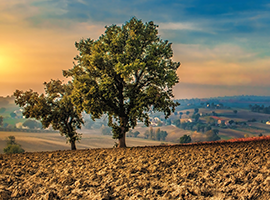 Soil scientists at the Centre for Ecology & Hydrology (CEH) have set out a Europe-wide framework for developing a natural capital accounting structure for soil which considers the impact of land use change, climate change and pollution.

Dr David Robinson of CEH led an international team of researchers who suggest monitoring soil cycles that impact on the economies, societies and ecosystems of European countries is vital to help policy makers protect soil quality and condition in future.

Soil is crucial to the production of food, feed, fibre and timber production for millions across Europe as well as for earth system functions that support the delivery of other ecosystem services – such as the creation of habitats for plant and animal life.

However, the scientists, from research organisations also including the European Commission Joint Research Centre in Italy, University of Basel, Switzerland, and the University of Melbourne, highlight that integrating information on soil resources with other measures of natural capital and economic activity remains one of the least developed areas of the United Nations System of Environmental and Economic Accounts (SEEA).

The study is the first attempt at a framework which provides a road map for country specific accounting of soil resources. Dr Robinson and his team see their research as a major step forward in developing an integrated soil monitoring approach called for by the United Nations Intergovernmental Technical Panel on Soils.

Dr Robinson, a soil scientist at CEH and lead author of the study published in Scientific Reports, said, "Our research highlights the need to integrate environmental data with economic measures such as national income, gross domestic product and national wealth, so that resource degradation is not invisible."

"From the policy perspective we need to know the state of soils and how much changes are due to degradation so we can help inform policy makers to intervene and reduce it."

"Monitoring soil cycles that impact the economy, society, and earth system function is crucial to this ambition. These include the carbon cycle, nutrient cycles, soil production and erosion cycle, and the water and energy balance."

"From the policy perspective we need to know the state of soils and how much changes are due to degradation so we can help inform policy makers to intervene and reduce it." Dr David Robinson, CEH

The scientists used earth observation, modelling and ground based sample data from the European Union’s Land Use/Cover Area frame statistical survey (LUCAS) soil monitoring programme covering the period between 2000 and 2012. They found that barren land and wood crop areas are most vulnerable to soil loss, while tree-covered soils, associated with the highest carbon stocks, are on the increase, with areas of arable crops declining.

Dr Robinson added, “There is a current gap in providing a monitoring and assessment information system for soil that can inform policy, regarding progress on achieving economic, social and environmental goals.”

“We believe this framework sets out the opportunity to address this deficiency in a way that will ultimately lead to better management of soil for food, other material resources and wider ecosystem services.”

Other collaborators in the research, which was funded by the Natural Environment Research Council (NERC), were the British Geological Survey.

The paper is available as an open access document.