A relentless sequence of storms, record rainfall and sustained very high river flows in parts of the UK meant that December was an extraordinary month in both meteorological and hydrological terms, with widespread and severe flooding in many areas.

Exceptionally stormy and wet conditions across the north contributed to the wettest calendar month on record for the UK (in a series from 1910). Slow-moving low pressure systems driven by a sustained moist south-westerly airflow brought prolonged heavy rainfall to northern and western areas. The spatial scale of sustained very high flows was remarkable; many large catchments in northern Britain recorded their highest ever peak flows and/or monthly mean flows. The three largest flows ever registered in river flow records for England occurred on the Eden, Lune and Tyne.

A short supplementary analysis with extra details of the hydrological impacts of the storms is also available on our blog. 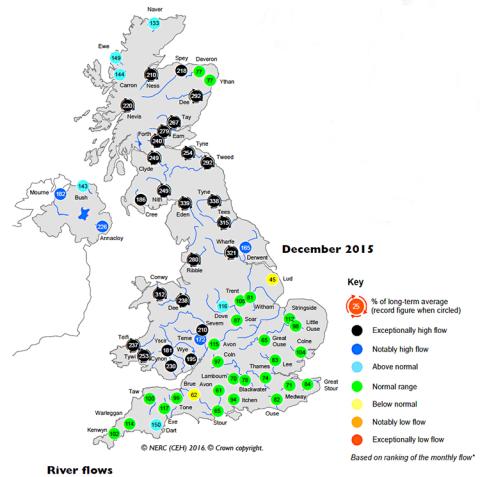 The persistent unsettled weather (including the named storms 'Desmond', 'Eva' and 'Frank') caused widespread and repeated flooding, bringing significant disruption to transport, utilities and agriculture and flooding thousands of homes.

Summary author Simon Parry added, "The wettest parts of the UK were away from the main aquifers, although groundwater levels increased sharply in some boreholes in the north. Reservoir stocks in north-west England doubled since the end of October, and end of December stocks for England & Wales were appreciably above average.

"With the exceptional wetness and flooding continuing into January in parts of northern Britain, the risk of further flooding in early 2016 remains high." 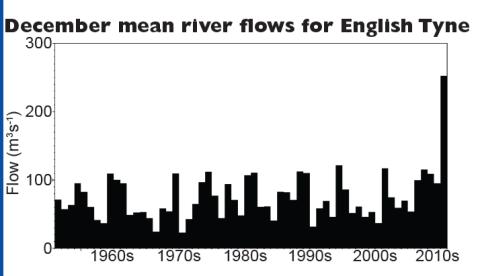 A PDF of the full 12-page December 2015 summary can be downloaded here.

A supplementary analysis of the hydrological impacts is also available

and on our blog.

The monthly summary is a look back at hydrological events occurring in December 2015. Latest information on flood warnings is provided by the Environment Agency, Natural Resources Wales and Scottish Environment Protection Agency (flood warnings for Northern Ireland are not available).

The NHMP also has a remit to analyse major flood and drought events in the UK and analyse long-term trends in UK hydrological data. The UK Monthly Hydrological Summary is normally published on, or before, the tenth working day, of the following month. A Hydrological Outlook for the UK is also available, and is updated monthly. The outlook published in January 2016 can be viewed here.