The persistent and seasonally unusual southerly track of the jet stream contributed to June weather conditions more typical of the late autumn. Record June rainfall totals were recorded in many areas and the normal seasonal decline in runoff and aquifer recharge rates, which began in April, was dramatically accentuated. 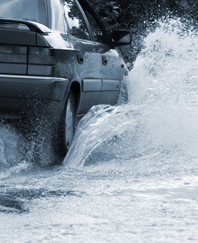 The above analysis is contained within the latest monthly hydrological summary (for June 2012) produced by the National Hydrological Monitoring Programme, operated by the NERC Centre for Ecology & Hydrology in conjunction with the NERC British Geological Survey.

The record April-June rainfall resulted in an almost complete termination of drought conditions (north-west Scotland aside) and, very unusually for the summer, the focus of hydrological concern switched decisively to the risk of flooding. Flood warnings, relating to both fluvial and flash flood risk, were common and widespread. The exceptional runoff rates impacted severely on property, transport, agriculture and leisure activities but the post-March runoff has also transformed the water resources outlook. Stocks in almost all index reservoirs are close to, or above, the normal early July level.

Terry Marsh, from the NERC Centre for Ecology & Hydrology (CEH), said, "The remarkable temporal contrast in rainfall amounts over the last ten months has caused an unprecedented shift in the aquifer recharge season."