Reactive nitrogen compounds from agriculture, transport and industry cause increased emissions of the greenhouse gas nitrous oxide (N2O) from forests in Europe, a major conference has heard. The emissions from forest soils are at least twice as high as estimated so far by the Intergovernmental Panel on Climate Change. 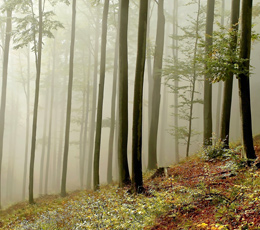 This is one of the key messages of the first study on nitrogen in Europe (the European Nitrogen Assessment), presented this week at the international Nitrogen & Global Change conference in Edinburgh, Scotland.

The ENA study (available to download here [NEED NEW INTERNAL LINK]), written by more than 200 scientific and political experts from 21 countries and 89 organisations, concludes that the consequences of reactive nitrogen from air in the European forests has been underestimated significantly. Based on the information now available, about 2% to 6% of the atmospheric reactive nitrogen is converted into nitrous oxide that is then emitted from forest soils into the atmosphere again. The corresponding estimate of the IPCC was about 1%.

Over a forest area of 188 million hectares, deposition of reactive nitrogen increased from 1860 to 2000 by 1.5 million tons per year. This corresponds to an increase in reactive nitrogen per hectare forest by about 8 kilogrammes. The increased atmospheric input of reactive nitrogen comes mainly from fertiliser use in agriculture and the associated volatilisation of ammonia, and from nitrogen oxide emissions due to the combustion of fossil fuels or biomass burning.

Increased deposition of reactive nitrogen to forests not only results in climate-damaging nitrous oxide emissions from forest soils, but also in a loss of diversity of plant and animal species and enhanced nitrate emissions into water.

Presenting this part of the ENA study to the conference audience in Edinburgh, Professor Klaus Butterbach-Bahl, of Karlsruhe University, emphasised: “The present atmospheric reactive nitrogen deposition is much too high. Our analysis shows that significant reductions in particular of ammonia emissions from agricultural activities are needed to reduce nitrous gas emissions from forest soils.”

The ENA, led by the Centre for Ecology & Hydrology's Dr Mark Sutton, is the first time that the multiple threats of nitrogen pollution, including contributions to climate change and biodiversity loss, have been valued in economic terms at a continental scale.  The report provides EU policymakers with a comprehensive scientific assessment on the consequences of failing to address the problem of nitrogen pollution – and outlines key actions that can be taken to reduce the problem to protect environmental and public health.

The ENA was launched at the start of the week-long Nitrogen & Global Change conference in Edinburgh (11-14 April 2011).

The European Nitrogen Assessment is available to download from the Nitrogen in Europe (NinE) website.  Chapter 19, on reactive nitrogen as a threat to the European greenhouse balance, is led by Prof Klaus Butterbach-Bahl.

More about the European Nitrogen Assessment

The assessment deals with ‘reactive nitrogen’ which includes ammonia, nitrous oxide (laughing gas), nitrogen oxides (NOx) which form acid rain and smog, and nitrates,  as distinct from the ‘inert nitrogen’ which makes up 78% of the earth’s atmosphere.

The European Nitrogen Assessment has been prepared through coordinated action led by the Nitrogen in Europe (NinE) Research Networking Programme of the European Science Foundation, the NitroEurope Integrated Project supported by European Commission’s 6th Framework Programme, and the COST Action 729.

The Assessment is a contribution to the work of the Task Force on Reactive Nitrogen (TFRN), led by the UK and the Netherlands, in support of the long-term goals of the UN-ECE Convention on Long-range Transboundary Air Pollution (CLRTAP). In parallel, the Assessment represents a European contribution to the work of the International Nitrogen Initiative (INI), a joint project of the International Geosphere Biosphere Programme (IGBP) and the Scientific Committee on Problems of the Environment (SCOPE), providing evidence to underpin many United Nations and other multi-lateral agreements.

The ENA has been conducted as a scientifically independent process. The views and conclusions expressed are those of the authors, and do not necessarily reflect policies of the contributing organizations.