Researchers are closer to understanding patterns of family relatedness and genetic diversity in bumblebees. The findings could help farmers, land managers and policy makers develop more effective conservation schemes for these essential pollinators. 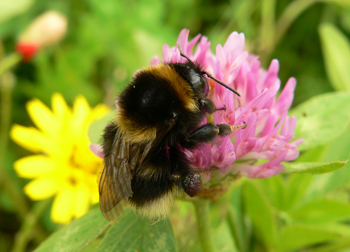 In the new study, published today (1 July 2014) in the journal Molecular Ecology, a combination of DNA analysis and landscape mapping was used to reveal the relationships between hundreds of wild bumblebee colonies of five different species, including four common and one rare species,  in an area of nearly 20 square kilometres of farmland in southern England.

The results are the first to reveal in detail the genetic relatedness between neighbouring bumblebee nests. They show that, in all five species, queens nesting near one another were unrelated or related at only a very low level.

The project was led by ecologists from the Centre for Ecology & Hydrology (CEH) working with researchers from the Zoological Society of London, University of Bristol and University of East Anglia.

Bumblebees form short-lived colonies consisting of a single queen and up to a few hundred daughter workers. At the end of the summer new queens are produced which, after mating and hibernation, go on to set up new colonies the following spring.

Lead author of the paper, Dr Stephanie Dreier from the Zoological Society of London and University of Bristol said, “Queens, not workers, are the ones that pass on their genes to the next generation. Knowing how far a queen flies from her birthplace to set up her own colony is therefore crucial for understanding how bumblebees use the landscape”.

Bumblebee nests are difficult to find in the wild, which makes direct sampling of DNA from nesting queens almost impossible. Instead the researchers took tiny amounts of DNA from the daughter workers that were caught foraging in the study area.

By mapping where workers from the same colony had been sampled, and estimating the location of each nest, the research team built up a “street view map” of neighbouring colonies and tested whether or not nests located near to one another were headed by highly related queens, such as sisters or cousins.

The results suggest that sister queens emerging from the same nest must disperse far, in different directions, before founding their own nests in the spring.

"This suggests that populations of both common and rare bumblebee species can be genetically well mixed through queen dispersal, and that managing landscapes with flower-rich habitats that are well connected at these scales remains a priority for bumblebee conservation." Dr Claire Carvell, CEH

Senior author Dr Claire Carvell, an ecologist at the Centre for Ecology & Hydrology, said, “We knew that bumblebee queens could fly long distances, but these results show that new queens frequently disperse widely, perhaps several kilometres away from their birthplace, before starting their own nest.”

She added, “This suggests that populations of both common and rare species can be genetically well mixed through queen dispersal, and that managing landscapes with flower-rich habitats that are well connected at these scales remains a priority for bumblebee conservation.”

The results also showed that, of the five species studied, the rare species Bombus ruderatus had lower genetic diversity than the four common species, and nested at lower density. Despite this, the study found no evidence that reduced numbers had led to inbreeding in this species. Dr Dreier added, “Very little is known about how genetic factors may be affecting rare and declining bumblebees. The rare bumblebee species at our study site currently has a small population size. However, management actions in place seem to be preserving its remaining genetic diversity.”

The research was funded by the UK Insect Pollinators Initiative.

CEH issued a press release for this story. For further information, contact the CEH Press Office.