Scientists are calling for public support as they seek to map the spread of a sexually transmitted fungal epidemic recently found within populations of the invasive harlequin ladybird in the UK.

Native UK ladybirds have suffered dramatic declines in numbers since the notorious harlequin ladybird (Harmonia axyridis) made its way to the UK ten years ago. Now an insect fungus, transmitted primarily during mating, has been found infecting the spotted invader. 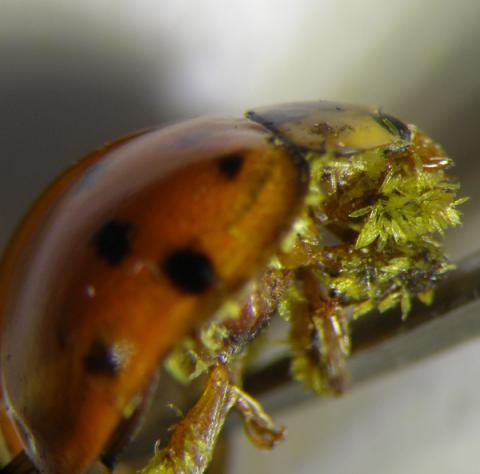 University of Stirling researchers Katie Murray and Matt Tinsley are working in partnership with Helen Roy at the Centre for Ecology & Hydrology (CEH) to survey the sharp rise of the Laboulbeniales fungal infection in the invasive harlequin.

This summer, Katie Murray found the fungus in London infecting a much higher proportion of harlequin ladybirds than had been seen previously. The researchers are now asking for help from the public to track the disease by looking for ladybirds in their houses, sheds or in leaf litter and completing an online survey launched today.

Records from the public will allow researchers to look at the extent and spread-rate of the epidemic. Previous studies have found the infection in a different species, the native 2-spot ladybird, particularly in London.

Katie Murray said, “The cold conditions at this time of year mean ladybirds huddle together in leaf litter or other sheltered places like houses, sheds, garages, or other outbuildings.

“Checking for these groups of ladybirds is a good way to have a look for the fungus, which leaves little yellow bristles growing on their bodies. Many ladybirds will have only a few of the bristles, so people will have to look carefully.”

Intrepid ladybird spotters are encouraged to submit photographs, count how many ladybirds they spot and how many appear to have the infection. The study will be added to the existing UK Ladybird Survey to help understand the effects of the fungus and the continued problems caused by the harlequin.

Helen Roy, an ecologist at CEH and coordinator of the UK Ladybird Survey, said, “People across the UK have been instrumental in tracking the spread of the harlequin ladybird and providing records of native ladybirds too.

“Through the inspiring contributions of citizen scientists we have hugely increased our understanding of the ecology of ladybirds in Britain. There is now a unique and exciting opportunity to monitor the spread of this intriguing fungus alongside the spread of the harlequin ladybird.”

The University of Stirling issued a press release for this story.

Complete the survey at iRecord/enter-Hesperomyces-records

Dr Helen Roy has written a blog post about the particular species of fungus infecting the Harlequin ladybird and the fascinating world of insect parasites.