Potential environmental risks associated with widespread use of influenza drug

Tamiflu, an antiviral flu drug, is recommended worldwide for the prevention and treatment of pandemic influenza infection. New research by a team of scientists based at the Centre for Ecology & Hydrology (CEH) sites in Oxford and Wallingford, UK concludes that extensive usage by the human population could cause a serious environmental challenge as well as encourage a new strain of avian flu to develop. 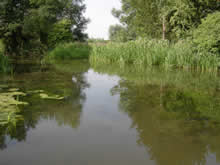 Reporting in the current issue of Environmental Health Perspectives, the research team, which includes microbiology, virology and river pollution experts, describe the likely effects of widespread antiviral treatment for a flu pandemic, on wildlife and the natural environment.

Lead researcher Dr Andrew Singer, said "An antiviral drug has never been widely used before, so we need to determine what might happen. During a flu pandemic, millions of people will all take Tamiflu at the same time. Over just 8 or 9 weeks, massive amounts of the drug will be expelled in the sewage and find its way into the rivers. It could have huge effects on the fish and other wildlife."

The build up of Tamiflu in rivers is likely to cause the avian influenza virus in ducks to become resistant to it, eventually resulting in a new wave of flu that is unaffected by the Tamiflu drug. People in south-east Asia, for example, could be more at risk from contracting the new strain of influenza because they have close and frequent contact with wildfowl.

Dr Singer said, "We hope that, in the short term, Tamiflu will slow the spread of the virus so that an effective vaccine can be produced. But we recommend that more research is done to identify the regions and people most at risk, to study how Tamiflu behaves in water, and to determine cheap and easy ways to break it down before it reaches the river."

The CEH research has focused on determining the effects of Tamiflu in rivers in the UK and the USA.