New research indicates that hormone disrupting pollutants are affecting the health and development of wild birds nesting along the urban rivers of South Wales.

Findings published recently in the Environmental Toxicology and Chemistry journal reveal that chicks of the Eurasian dipper – a river bird that feeds exclusively on insects and fish in upland streams – are underweight compared to their rural counterparts. Also of concern is that birds nesting in urban rivers have altered hormone levels, and are hatching fewer female chicks than those nesting along rural rivers, which could have negative implications for the population’s breeding and survival.

Data obtained by a team of scientists from Cardiff University, working in collaboration with the Universities of Saskatchewan and Exeter, the Centre for Ecology & Hydrology and the NERC Life Science Mass Spectrometry Facility, suggest that urban contaminants such as PCBs (polychlorinated biphenyls) and PBDE flame-retardant chemicals (polybrominated diphenyl ethers) acquired through their food are to blame. Results showed a strong correlation between contamination by PBDEs and PCBs with depressed thyroid hormone levels in chicks – one thyroid hormone was 43% lower in chicks from urban rivers than those rural rivers.

Contaminant analysis of dipper eggs (organochlorine pesticides, PCBs, and PBDEs) was carried out at CEH's Centralised Chemistry Facility at Lancaster, where scientists are able to measure concentrations of chemicals from a range of sample types.

Cardiff University issued a news release for this story.

The Conversation UK article by Prof Steve Ormerod: Meet the dipper – our canary in the coal mine for polluted rivers 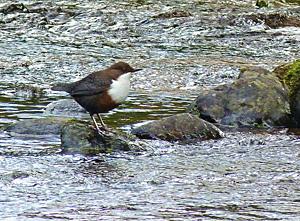