If all peat bogs in the world were to disappear, the amount of CO2 in the atmosphere would increase by two-thirds. An international group of scientists from the EU-funded PEATBOG project, headed by CEH’s Professor Nancy Dise, has studied how bogs react to climate change and increased levels of nitrogen and sulphur deposition.

In a survey of 56 bogs across Europe led by team members Dr Bjorn Robroek and Jos Verhoeven from the Netherlands, the scientists made the surprising conclusion that, although climate change and air pollution may cause plant species to decline or disappear, within the range of conditions studied, these may be replaced by others with similar ecological functions. The results of their study are published in Nature Communications today (Friday 27 October).

Peat bogs cover only 3 percent of the earth’s surface, but metre for metre they store more carbon than any other terrestrial ecosystem: around 500 billion tonnes of it, or 67 percent of the amount of carbon in the earth’s atmosphere.

"Ecosystems such as acid grassland and heathland can be highly sensitive to air pollution and climate change and, since bogs are similar low-nutrient habitats, we suspected that they too would be sensitive,” said Dise. "This is of concern since long-term loss of even a few centimetres of peat globally due to climate change or air pollution would mean a significant increase in atmospheric CO2."

"Long-term loss of even a few centimetres of peat globally due to climate change or air pollution would mean a significant increase in atmospheric CO2." Professor Nancy Dise, Centre for Ecology & Hydrology

Sphagnum: the architects of the bogs

The plants and animals that live in bogs are adapted to these unique conditions and are indispensable for the continued survival of the bog ecosystem. That applies especially to peat mosses (Sphagnum spp.), which are the architects of the bog, storing vast amounts of carbon and retaining water like a sponge. If the peat mosses disappear due to climate change, pollution, or combinations of stresses, that would mean the end for peat bogs.

"We know that changing climate and increases in nitrogen and sulphur in the atmosphere can cause certain plant species to disappear from areas. That may also have strong consequences for important biological functions, like carbon sequestration," Robroek explained. 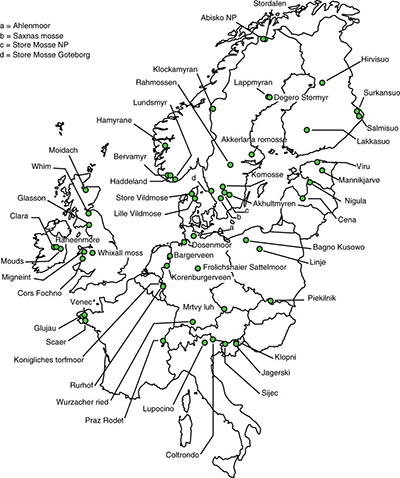 The scientists studied the effects of climate change and the increase in airborne nitrogen and sulphur by comparing 56 peat bogs across Europe. In each bog, they inventoried which plant species occurred in the area. They then analysed the relationships between the species composition, the local climatic conditions and the atmospheric deposition of nitrogen and sulphur. This indicated that there are clear differences in vegetation between individual bogs, but remarkably they all displayed similar numbers of species.

Further analysis showed that two clusters of plants can be identified that usually grow together. The difference between the clusters is that they have opposing preferences for certain conditions. One group thrives under higher temperatures and precipitation, while the other prefers lower temperatures and less precipitation. The data showed that the absence of species with certain functions is compensated by the presence of species from the other cluster with the same functions. In this way, the bog can continue to function properly even if the plant species composition shifts as a result of environmental change.  Or, as Dise puts it, "Bogs are tougher than we thought."

That is good news, considering the estimated 500 billion tonnes of carbon that lie sequestered in peat bogs around the world. However, it is important to recognize that the species in the European bog communities are adapted to long-term conditions, and also that the conclusions of the study only apply over the climate and pollution range studied. Rapid changes in climate or pollution, or changes outside the normal range for European bogs, may overwhelm this inherent resilience. And it is important that species are able to migrate, so bogs must have a certain level of connectivity. However, most European peat bogs have either disappeared or been seriously affected by human activity.

"It is therefore vital that the existing peat bogs are not damaged by drainage or other major interventions,"  Verhoeven said.

The PEATBOG project was financed under the ERA-net project BiodivERsA(I), within the European Union’s 6th Framework Programme for Research. The UK contribution to BiodivERsA(I) was funded by NERC and DEFRA.

Bjorn Robroek is now with the University of Southampton. He was formerly with Utrecht University, who issued a news release for this story.