Paper highlights remarkable efforts to save butterfly from extinction

Coinciding with the 25th anniversary of the Large Blue butterfly's reintroduction to Britain, ecologists are for the first time publishing the details of the decades of research that has helped them to rescue this rare butterfly from the brink of extinction.

The research, by Professor Jeremy Thomas from the University of Oxford and the Centre for Ecology & Hydrology with his colleagues, is being published in Science. Sir David Attenborough has described the restoration of the Large Blue butterfly to Britain as a remarkable success story. 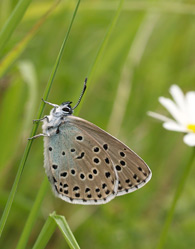 The Large Blue, also known as Maculinea arion, is now one of just three UK butterflies on course to meet the Convention of Biological Diversity’s target to reverse species’ declines by 2010. This rebound has closely followed the predictions generated by the model published in Science.

Professor Thomas explained: “There are few known examples of a model being able to predict the success of a conservation effort as well as ours did, for any insect. We are confident that this detailed information will help those attempting to bring other endangered species back from the brink.”

The study shows how the Large Blue’s extreme dependence on a single ant species led to its demise - their habitat became overgrown, causing soil temperatures to drop and the ants to diminish. Before this discovery, butterfly collectors were generally blamed for the Large Blue's decline.

While ecologists generally knew that the Large Blue had a complex life cycle, its intense dependence on Myrmica sabuleti red ants only came to light once Professor Thomas began studying Britain's last surviving Large Blue colonies during the 1970s.

Professor Thomas said: “For six years from May to late September I lived with the last UK colonies, measuring everything, including their behavior, how many eggs they laid, the survival of individual eggs, and how many caterpillars were in the plants. It was a bit like a detective story.”

He compiled the information into life tables, which show the number of new eggs and those that survived each year from 1972 to 1977 - now published for the first time in the Science study. 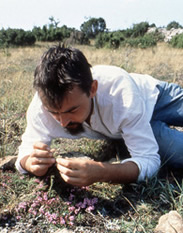 With this field data, Professor Thomas and his co-authors explored the possible factors that could be causing the Large Blue's decline. They realised the grass in the butterflies' habitat had grown too long due to changes in land management and a devastating increase in myxomatosis. The soil in the overgrown grassland was therefore too cool to support adequate numbers of the M. sabuleti ants. Without enough ants to raise their young, the Large Blue butterflies dwindled. The researchers combined these ecological relationships into a numerical model, upon which future conservation efforts were based.

From the late 1970s, conservationists followed Professor Thomas' recommendations and restored the butterfly's proper habitat by clearing scrub and reintroducing grazing animals in a project led by CEH. And from 1983, Thomas and co-author David Simcox from CEH began introducing Large Blue butterflies imported from Sweden into restored habitat sites.

By 2008, the butterflies occupied 30% more colonies than they had in the 1950s, before the major decline began.

Restoring the Large Blue’s habitat may also provide collateral benefits for other species that live there, the authors have speculated. On some of its conservation sites there have already been dramatic increases in rare birds, plants and other butterflies, such as the wood lark, pale heath violet and the Pearl-bordered Fritillary.

Past CEH research into myrmecophily

A press release was issued to mark publication of this paper