October was a mixed month in the UK, with a pronounced north-west/south-east contrast. Westerly and south-westerly winds, including ex-hurricane Ophelia and storm Brian, brought strong winds and bands of rainfall to the north and west of the country. In contrast, the south and east was dry, with less than a third of average rainfall recorded in some parts.

Given the warm, dry conditions in the south-east, soil moisture deficits (SMDs) climbed and remained above average in regions of south-eastern England. River flows were generally in the normal range or above throughout the UK, with flows in north Wales and northern England approaching twice the October average. In contrast, river flows in south-east England were normal to exceptionally low, with a number of catchments recording less than half the October average. A similar spatial pattern is reflected in the October groundwater status: levels in index boreholes in southern England generally fell and were below normal to notably low. 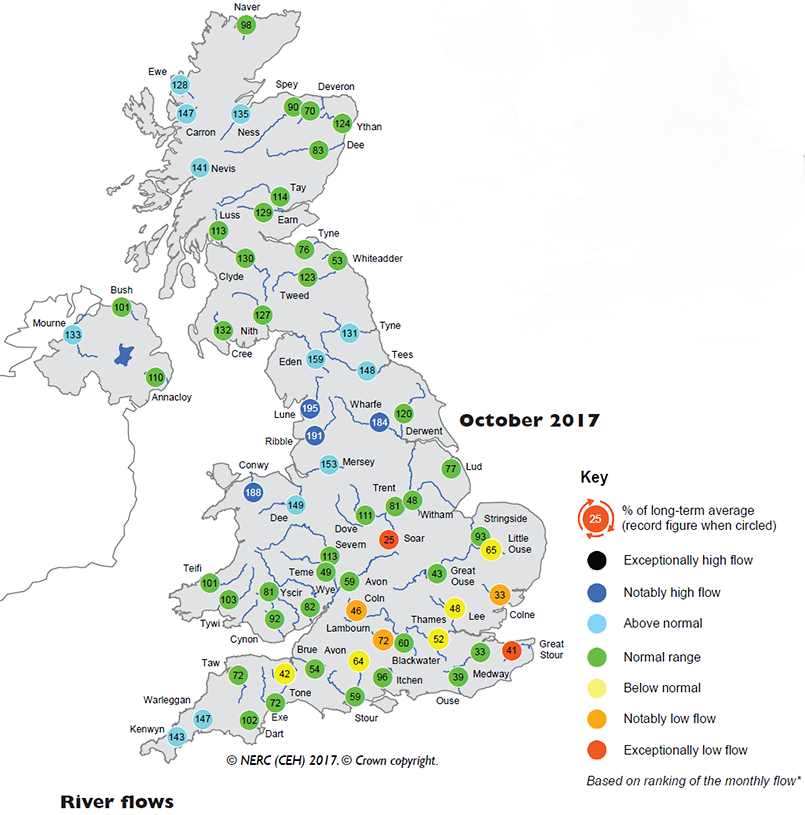 Summary author Lucy Barker of the Centre for Ecology & Hydrology said, "While summer was damp, the influence of the dry winter/spring of 2016/2017 is still apparent in groundwater levels and in some rivers. The long‑term water resources outlook is dependent on recharge over the winter half-year, which will commence from a below-normal baseline in the south and east. The dry start to autumn has delayed the onset of replenishment, implying that above average rainfall will be needed over the late autumn to winter to return conditions to normal."

The monthly summary is a look back at hydrological events occurring in September 2017. Latest information on flood warnings is provided by the Environment Agency, Natural Resources Wales and Scottish Environment Protection Agency (flood warnings for Northern Ireland are not available).