November was another unsettled month, particularly in the west, with wintry conditions towards month-end in the east. At the national scale rainfall was moderately below average; only parts of northern Scotland, northern England and western Wales received above average rainfall. It was particularly dry in the Midlands, south-east England and central Scotland, with parts registering less than half the November average.

Soil moisture deficits (SMDs) generally decreased across the UK during November, but at month-end soils were wetter than average in the north and drier than average in the south. River flows were generally in the normal range or below, despite the new November peak flow records established in the north-west. Flows were notably low in parts of southern England, with some catchments registering less than a third of the November average.

Reservoir stocks decreased relative to average at the majority of impoundments (markedly so at some, e.g. Clatworthy) but were near average at the national scale. Stocks were substantially below average at the London group (24% below) and Bewl registered the lowest November stocks on record (in a series from 1988). With limited recharge in the autumn, and depressed runoff in some parts of the south, the long-term water resources outlook will depend on rainfall over the winter and early spring. 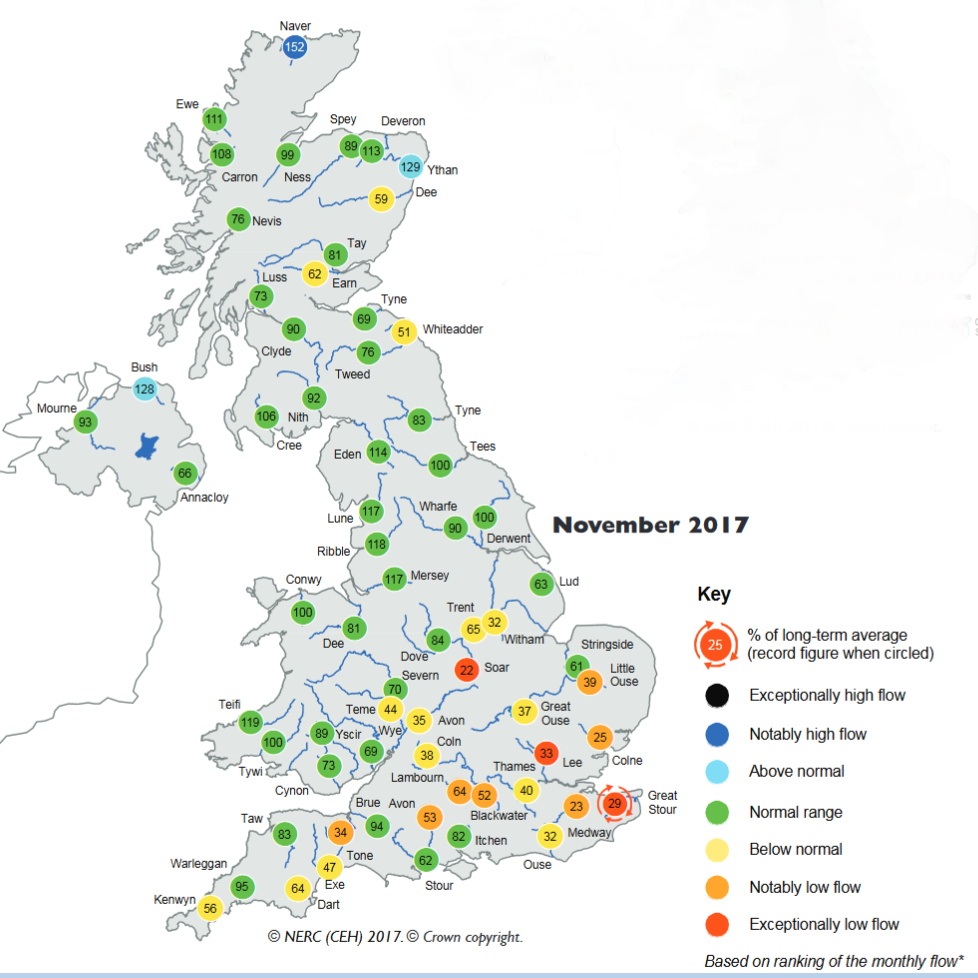 Summary author Katie Muchan of the Centre for Ecology & Hydrology said, "Given current groundwater levels, which reflect rainfall deficiencies built up over the last 12–18 months, appreciably above average winter rainfall will be needed to return conditions to the normal range in parts of the English Lowlands. Conversely, a continuation of the dry weather, amounting to a second successive dry winter, would increase the potential for environmental and water resources stress in 2018."

The monthly summary is a look back at hydrological events occurring in November 2017. Latest information on flood warnings is provided by the Environment Agency, Natural Resources Wales and Scottish Environment Protection Agency (flood warnings for Northern Ireland are not available).