Nitrogen on the table: pollution, climate and land use

A new report quantifies for the first time how much our food choices affect pollutant nitrogen emissions, climate change and land use across Europe. 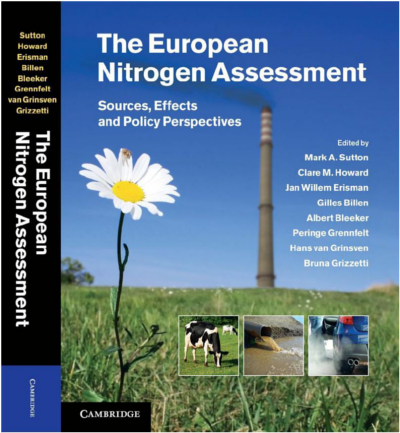 The executive summary of the European Nitrogen Assessment Special Report on Nitrogen and Food, Nitrogen on the Table, was released today (Friday 25 April 2014). The Special report provides an assessment of what would happen if Europe were to decrease its consumption of meat and dairy products. It shows how much cutting down on meat and dairy in our diets would reduce nitrogen air and water pollution, and greenhouse gas emissions, while freeing up large areas of farmland for other purposes such as food export or bioenergy. It also considers the health benefits of reduced meat consumption. The full report is published next month.

Report lead author Henk Westhoek, programme manager for Agriculture and Food at PBL (the Netherlands Environmental Assessment Agency) said, “The report shows that the nitrogen footprint of meat and dairy is considerably higher than that from plant-based products. If all people within the EU would halve their meat and dairy consumption, this would reduce greenhouse gas emissions from agriculture by 25 to 40%, and nitrogen emissions by 40%.The EU could become a major exporter of food products, instead of a major importer of for example soy beans.”

Prof Mark Sutton, an environmental physicist at the Centre for Ecology & Hydrology and a co-author of the report, said, "Humans' use of nitrogen is a major societal challenge that links environment, food security, and human health. There are many ways in which society could improve the way it uses nitrogen, and this includes actions by farmers and by ourselves.

"Our new study shows that adopting a demitarian* diet across Europe would reduce nitrogen pollution levels by about 40%, which is similar to what could be achieved by adopting low-emission farming practices.”

The work has been conducted by the Task Force on Reactive Nitrogen of the United Nations Economic Commission for Europe (UNECE). In 2011 the Task Force produced the first European Nitrogen Assessment (ENA) which showed that better nitrogen management will help reduce air, water and soil pollution, greenhouse gas emissions, simultaneously reducing threats to human health, biodiversity and food security.

The UNECE Task Force on Reactive Nitrogen is tasked with providing policy makers in the Convention on Long-range Transboundary Air Pollution with scientific evidence to support international decision making on environmental policies, especially as these link air pollution with water, soil, climate and biodiversity.

Professor Sutton said, “As the EU now starts to renegotiate the National Emissions Ceilings Directive, it is an open question to what extent countries will emphasise technical measures or such behavioural changes. One of the major barriers to action is the international trade in food commodities. The result is that countries fear that tackling nitrogen pollution will reduce their international competitiveness. The present study shows that there is huge power for pollution control in simply reducing our meat and dairy consumption."

Nitrogen on the Table - executive summary of the European Nitrogen Assessment Special Report on Nitrogen and Food, published 25 April 2014 on the Task Force for Reactive Nitrogen website.

*The term ‘demitarian’ refers to half the normal consumption of meat (and by extension other animal products) compared with the normal local situation in developed countries.The term was introduced by Prof Sutton in 2009 as part of the “Barsac Declaration on Environmental Sustainability and the Demitarian Diet”. This document represents a commitment by scientists to reduce the environmental footprint of their own conferences.