A new international study published in Science has shown that implementing 14 key air pollution control measures could slow the pace of global warming, save millions of lives and boost agricultural production. 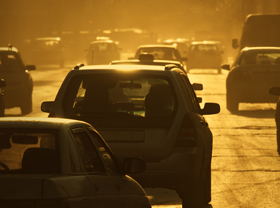 The study was led by Drew Shindell of NASA's Goddard Institute for Space Studies and included scientists from the Stockholm Environment Institute (SEI) at the University of York, King’s College London and the UK Centre for Ecology & Hydrology. Researchers identified 14 measures targeting methane and black carbon emissions that could slow global mean warming by approximately 0.5ºC by 2050. The measures could also prevent between 700,000 and 4.7 million premature deaths each year and increase global crop yields by between 30 million and 135 million tonnes per season.

While all regions of the world would benefit, avoided warming is greatest in central and northern Asia, southern Africa and around the Mediterranean, total numbers of avoided premature deaths are greatest in Asia and Africa and the greatest total tonnage gains in crop production are estimated to occur in China, India and the US, followed by Pakistan and Brazil. Countries in South Asia and the Sahel region of Africa could see considerable reduction in the disruption of rainfall patterns.

Black carbon, a product of the incomplete combustion of fossil fuels or biomass such as wood or agricultural crop residues, damages human health by entering the lungs and exacerbating a number of respiratory diseases. It also absorbs radiation from the sun causing the atmosphere to warm and rainfall patterns to shift and reduces the reflectivity of bright surfaces, such as ice and deserts, a process that hastens global warming. Methane is a precursor to ground-level or lower atmosphere ozone, a component of health-sapping smog, and is also a potent greenhouse gas. Ground level ozone at current levels also damages plants and reduces agricultural yields in sensitive areas.

Dr Johan Kuylenstierna, the Director of SEI at York, said, "All 14 measures are based on existing technologies and can be implemented immediately, so do not require long development processes."

Another co-author of the study, Professor Martin Williams from the Environmental Research Group at King’s College London, said: "Measures taken now to reduce carbon dioxide emissions will not have any effect on the global climate for another 40-50 years. We have shown that there are things we can do to begin to mitigate the temperature increases already being seen.’’

"The combination of methane and black carbon measures along with substantial carbon dioxide emissions reductions has a high probability of limiting global mean warming to <2ºC during the next 60 years, something which neither set of emissions reductions achieves on its own.”

Professor David Fowler of the Centre for Ecology & Hydrology, added: “These control measures represent many win–win options with benefits for human health and climate as well as reducing waste, for example with the methane controls.”

Black carbon and methane pollutants come from a wide variety of sources and the 14 measures identified by the study have all been successfully applied in different parts of the world.

"These control measures represent many win–win options with benefits for human health and climate as well as reducing waste, for example with the methane controls."

The research team used sophisticated emission, air quality and climate models (e.g. IIASA GAINS, NASA GISS and ECHAM) to estimate the impact of emissions reductions. The modelling shows that the benefits from the methane reductions would be widespread because methane is evenly distributed throughout the atmosphere.  The methane measures if fully implemented will to large global climate and agriculture benefits and relatively small human health benefits, all with high confidence and worldwide distribution.

The black carbon measures are likely to provide substantial global climate benefits, but uncertainties are much larger. There is more certainty for the black carbon measures concerning the large regional human health benefits as well as reductions in regional rainfall disruptions, ice melting in both the Arctic and the Himalayas and improvements in regional agricultural yields.

The Stockholm Environment Institute (SEI) at the University of York issued a press release for this story.