A special issue of the scientific journal Philosophical Transactions of the Royal Society B: Biological Sciences was published this week, outlining how human influences may shape the future of rainforests. Rainforests are vanishing worldwide and their protection is considered a pressing issue by many. 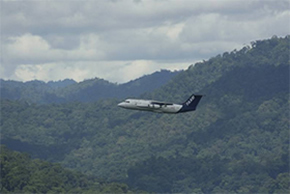 With a focus on the Danum Valley area of Sabah in Malaysian Borneo, the theme of the special issue was the future of tropical rainforests in a changing landscape and climate. Many of the papers were based on research carried out as part of the Royal Society South East Asia Rainforest Research Programme. Scientists from the Centre for Ecology & Hydrology (CEH) contributed to several of the papers.

Results in several of the new papers came from the "OP3 - Oxidant and Particle Photochemical Processes above a South-east Asian Tropical Rainforest" project. OP3 involved four CEH scientists in two separate ground-based measurement periods at the Danum Valley Research Centre during 2008. The second of these field campaigns involved observations above the ground-based site aboard the Natural Environment Research Council (NERC) Facility for Airborne Atmospheric Measurements BAe 146 research aircraft, a collaboration between the Met Office and NERC.

Professor David Fowler of CEH co-edited the special issue. Prof Fowler was also the lead author of a paper presenting new results concerning the effects of land use on surface-atmosphere exchanges of trace gases and energy in Borneo. This work was carried out with CEH colleagues, together with research partners from six institutions in the UK, Italy and Malaysia.

Their choice of study sites allowed them to compare fluxes over oil palm plantations with a rainforest. Total volatile organic compound (VOC) emissions were larger over the oil palm than over the rainforest by a factor of three. Emissions of nitrous oxide were larger from the soils of the oil palm plantation than from the soils of the rainforest by approximately 25 per cent. It is clear from the measurements that the large change in the species composition generated by replacing rainforest with oil palm leads to profound changes in the net exchange of most of the trace gases measured, and thus on the chemical composition of the boundary layer over these surfaces.

Dr Lina Mercado, formerly of CEH, was lead author of a paper in the special issue which models the degree to which nutrient levels affect photosynthesis and stem growth.

Philosophical Transactions of the Royal Society B: Biological Sciences Theme issue: The future of South East Asian rainforests in a changing landscape and climate (subscription only articles)

Fowler et al: Effects of land use on surface–atmosphere exchanges of trace gases and energy in Borneo: comparing fluxes over oil palm plantations and a rainforest (abstract)