The 1975-76 drought was considered at the time the most severe yet experienced across much of the UK.  Unusually, given its extreme intensity and broad spatial extent, the documentation of the drought remains relatively limited; this is particularly true in relation to material reviewing the wide range of its impacts.

To redress the balance, hydrologists Terry Marsh and John Rodda have co-authored a new, 58-page report providing a contemporary and retrospective review of the events of 1975 and 1976. The report (PDF, 12.9mb) is published this week by the Centre for Ecology & Hydrology (CEH).

The publication is particularly timely given the dry weather across much of the UK during recent months.

Part I of the publication comprises a report on the drought completed in 1977, but previously unpublished, by John Rodda (CEH Fellow and formerly Deputy Director of the Water Data Unit).

Part II, by Terry Marsh from CEH, capitalises on hydrometeorological data collected over the last 35 years to provide a retrospective review of the drought with a particular focus on whether the singular severity ascribed to the 1975-76 drought requires revision.

The 35-year period since the 1975-76 drought has been one of considerable hydrological volatility with notable drought episodes in 1984, 1989/90, 1991/92, 1995-97, 2003 and 2004-06.  The cluster of recent droughts, together with a continuing increase in temperatures has focused concern on the degree to which climate change may be increasing the vulnerability of the UK to periods of sustained rainfall deficiency.

The report concludes, “In relation to some manifestations of drought stress – the depletion of groundwater resources in particular – the 1976 drought’s severity has been at least matched during several protracted drought episodes in the last 20 years. However, the analyses presented here reinforce the primacy of the 1975-76 drought in terms of its hydrological severity, spatial extent and its range of impacts.”

Co-author Terry Marsh said, “Across most of the UK, and large parts of western Europe, the 1975-76 drought remains the primary benchmark for the design and development of drought alleviation strategies.”

Taken together, the contemporary and retrospective appraisals of the 1975-76 drought are intended to help those managing water resources, the environment, agriculture and other climate-sensitive areas of endeavour. They may assist politicians and policy-makers prepare for a future when changes in climate and water demand patterns are likely to present challenges of a comparable, or greater, magnitude than those encountered during the 1975-76 drought.

The report should be referenced as:

The National Hydrological Monitoring Programme (NHMP) produces reports, or webpages, on recent hydrological events of major significance. Some aim to comprehensively summarise the event and provide a historical record, whilst others are contemporary and often preliminary assessments of an unfolding episode, and their contents should be understood in this context. 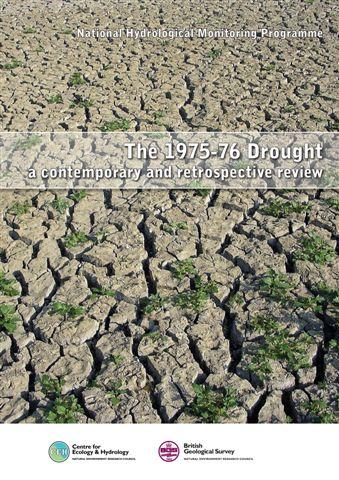