September saw a continuation of the marked spatial variation in rainfall across the UK which has been featured throughout 2011. The lowest monthly rainfall totals coincided with those areas for which long-term rainfall deficiencies were already substantial. There was, therefore, little amelioration of drought conditions in affected areas of England. 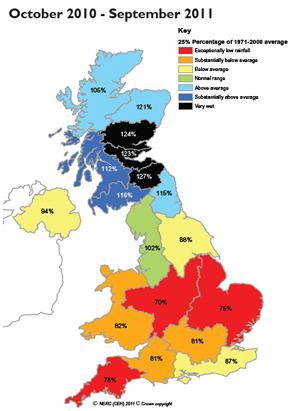 The above analysis is contained within the latest monthly hydrological summary (for September 2011) produced by the National Hydrological Monitoring Programme, operated by the Centre for Ecology & Hydrology in conjunction with the British Geological Survey.

The summary reports that September river flows and groundwater levels were below average across much of the English lowlands. Substantial long-term runoff deficiencies continue to develop in many index rivers, particularly in the Midlands and south west. The drought continues to exert stress on the aquatic environment: dry wells, springs and ponds were reported from parts of the Midlands and East Anglia, whilst the dry soils posed problems to farmers lifting crops.

The spatial contrast in long-term rainfall receipt is also reflected in reservoir stocks – stocks are healthy in Scotland and Wales, whilst early October stocks were substantially below average in parts of southern England and the Midlands.

Jamie Hannaford, from the Centre for Ecology & Hydrology, said, “With the dry episode of the last week persisting into October, and notably dry soils for the time of year across much of England, the seasonal recovery in river flows and groundwater levels is likely to be delayed into the winter unless significantly above average rainfall occurs in the late autumn.”