October was an exceptionally mild month but the spatial distribution of the rainfall was again remarkable – triggering flooding in many western and northern regions but increasing long term rainfall deficiencies across much of the English Lowlands where drought conditions are severe in some areas.  Whilst Northern Ireland registered its second wettest October on record, a few places in the South East recorded less than a quarter of the average monthly rainfall. 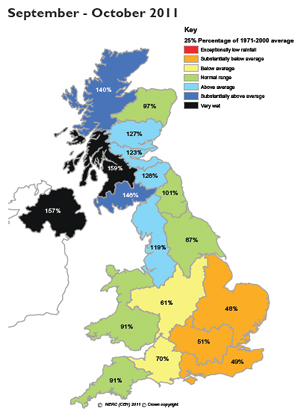 The above analysis is contained within the latest monthly hydrological summary (for October 2011) produced by the National Hydrological Monitoring Programme, operated by the Centre for Ecology & Hydrology in conjunction with the British Geological Survey.

Jamie Hannaford from the Centre for Ecology & Hydrology said, “Above average late autumn and winter rainfall is needed in much of central, southern and eastern England to secure a healthy water resources outlook by the spring of 2012.”