December was a truly remarkable month in climatic terms: the coldest December on record for the UK (by a consider­able margin). For Scotland, it was the coldest month since February 1947 and, most notably, Northern Ireland registered its coldest month on record. A large proportion of the December precipitation fell as snow (accumulations locally exceeded 50cm) but regional precipitation totals were well below average and the UK registered its driest December since 1963. 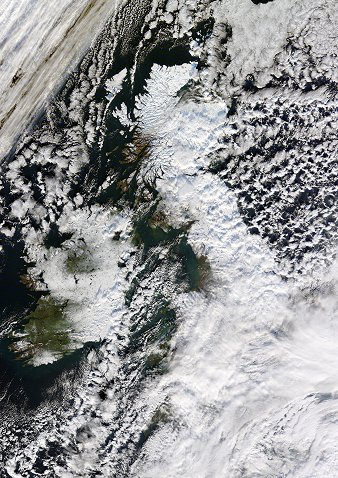 With catchments frozen for the majority of the month, runoff and recharge conditions were of a type not experienced for 30 years. Snowmelt during a few brief milder interludes contributed to some modest spates but river flows were mostly in recession – and estimated December outflows from the UK were the lowest since 1975. The limited rainfall, combined with frozen ground conditions, resulted in very meagre aquifer recharge and groundwater levels are considerably below average over wide areas.

The above analysis is contained within the latest monthly hydrological summary (for December 2010) produced by the National Hydrological Monitoring Programme, operated by the Centre for Ecology & Hydrology in conjunction with the British Geological Survey.

The December summary adds that, despite the substantial snowfall (which implies some underestimation in the monthly precipitation totals), regional precipitation totals for December were mostly <50% of the average; a number of western and central areas registered <25%. Provisional figures indicate that the UK recorded its 3rd driest Decem­ber in a series from 1914. This is reflected in relatively depressed stocks in some western reservoirs (stocks at Clatworthy were the 2nd lowest for early January in a 24-yr series). Nonetheless, overall reservoir stocks for England &Wales remain only around 3% below the early January average.

Provisional data indicate that, at the national scale, runoff for 2010 as a whole was the lowest since 1997, with particularly notable runoff deficiencies in western catchments. 2010 was the driest year since 1976 and 1975 for Wales and the Wessex region respectively. Only Northumbria and North East Scotland registered above average regional rainfall totals for 2010.

Entering 2011, the water resources outlook is spatially variable but across much of the country the late-winter/early spring rainfall will be particularly influential; a dry January-March could lead to some water resources stress.