Following the UK floods in summer 2007 and those in Cornwall in 2010, forecasting and warning of surface water flooding has received much attention. There is a growing demand for more robust, accurate and timely forecast and alert information on surface water flooding to facilitate effective mitigation actions. 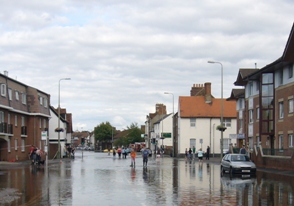 At the International Conference on Flood Resilience, taking place in Exeter, UK this week, Dr Steven Cole from the Centre for Ecology & Hydrology (CEH) is presenting preliminary results from a study, conducted as part of the Natural Hazards Partnership (NHP), which is addressing some of the limitations of existing surface water flooding alert systems.

The CEH team has collaborated with the Health & Safety Laboratory (HSL) to produce dynamic maps of the possible impact of surface water flooding. These combine the dynamic hazard footprint with time-varying national impact datasets on population, infrastructure, property and transport such as the EA flood risk maps and the National Population Database from HSL.

The Natural Hazards Partnership (NHP) aims to provide co-ordinated information on natural hazards from across UK government departments, agencies, trading funds and public sector research establishments. Within the NHP, and in order to deliver more targeted risk assessments to government and Civil Contingency Act Category 1 and 2 responders, a cross-agency Hazard Impact Model (HIM) framework initiative is developing impact models for specific hazards. Surface water flooding is one of three initial hazards being trialled. Staff from the Environment Agency and the Flood Forecasting Centre are involved in the research collaboration as key stakeholders in advancing operational surface water flooding guidance.

Details of the Grid-to-Grid model (PDF)