A new web-based tool that calculates an individual's "nitrogen footprint" has been launched at the Nitrogen & Global Change conference, taking place in Edinburgh this week. The calculator was created by a team of scientists from the Energy Research Centre of the Netherlands and the Universities of Virginia and Maryland, and is a project of the International Nitrogen Initiative - a global network of scientists who share research and data on the nitrogen dilemma. 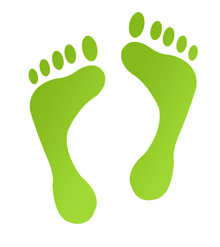 Although most of the nitrogen in the atmosphere is completely harmless (unreactive nitrogen, 78% of the atmosphere), once turned into reactive nitrogen, for example by artificial fertilizers or burning of fossil fuels, the effect is very different. Nitrogen pollution is now recognised as a major environment problem, and a threat to global biodiversity. It contributes to human health problems, water pollution, ozone layer depletion, smog, climate change and coastal dead zones.

The European Nitrogen Assessment, published earlier this week at the conference, estimates the annual cost of damage caused by nitrogen pollution across Europe at up to £280 billion, but the nitrogen story is a complex one, with both positive and negative effects.

Scientists hope the new nitrogen footprint calculator will both raise the profile of the nitrogen issue and galvanise people into action. By measuring what and how much we eat, as well as other factors such as how they travel, the calculator shows our impact on the nitrogen cycle. The website also makes recommendations for how to lessen our nitrogen footprint, similar to other sustainable living choices.

The calculator is the first in a series of research tools, known as N-Print, which the N-Print team are developing to connect the production of nitrogen with the policies used to manage it. A similar calculator is being created for farmers and other nitrogen users, as well as a tool for policymakers that will provide regional nitrogen emission ceilings to show how much nitrogen can be released in these regions without major environmental impact.

The Nitrogen & Global Change conference continues in Edinburgh until April 14.