A study recently published in the Journal of Geophysical Research provides new insights into how sources of carbon are emitted to the atmosphere in peatlands. 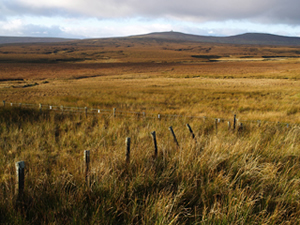 A significant amount of organic carbon and carbon dioxide is stored within the partially decomposed plant remains that make up peatlands in northern climates. If this carbon were released to the atmosphere, it could affect climate.

Dr Mike Billett and colleagues from the Centre for Ecology & Hydrology (CEH), together with collaborators from Leeds University and the NERC Radiocarbon Facility, measured carbon amounts and isotope ratios in particulate carbon, dissolved organic carbon, methane and carbon dioxide released from three natural peat pipes and the downstream catchment outlet of a small peatland in the north of England. In peatlands, soil pipes - naturally occurring tubes of various sizes - could provide a route for deeply buried carbon to escape to the atmosphere.

Isotope ratios provide an indication of the source and age of the carbon; generally, deeper carbon is older. Their results indicate that carbon leaving the catchment came from both deep and shallow pipes, as well as from non-pipe sources. Pipes were found to vent old, deep carbon dioxide and particulate carbon, though not old dissolved organic carbon, to the surface.

The study concludes that surface drying and other environmental changes, some induced by human activity, can increase the density of soil pipes, and thus could lead to increased amounts of deep carbon reaching the atmosphere.

Lead author Dr Mike Billett said, “The ability of natural pipes in peatlands to "fast track" old carbon, stored deep within peat, to the surface is an important finding. Recognising that pipes are important transport pathways for carbon means that we will now have to rethink some of the classic ideas about how carbon is released from peatland systems."