July featured a mixture of sunshine and showers bookending a warm and briefly very hot spell mid-month. Aside from this spell, periods of persistent unsettled weather delivered substantial rainfall predominantly to northern and western regions of the UK, resulting in an exaggerated north-west / south-east rainfall gradient.

Whilst parts of Scotland, Northern Ireland, northern England and north Wales were considerably wetter than average, much of southern England registered less than half of the average rainfall. For England it was the driest July since 1999.

The summary shows that changes in soil moisture deficits (SMDs) in July reflected the rainfall gradient, with soils wetting up in the north and west and SMDs increasing in the south and east. River flows for July were above average across the majority of the UK, substantially so in western Scotland, Wales and East Anglia, but below normal in parts of south‑west England. Groundwater levels fell or remained stable in almost all index boreholes (as expected for the time of year) but largely remained in the normal range or above. Reservoir stocks for England & Wales fell slightly but remained above average for the time of year, appreciably so for some impoundments in the north and west.

Summary author Simon Parry from the Centre for Ecology & Hydrology said, "With groundwater levels and reservoir stocks generally near or above average, the water resources outlook remains healthy for the remainder of the summer and early autumn." 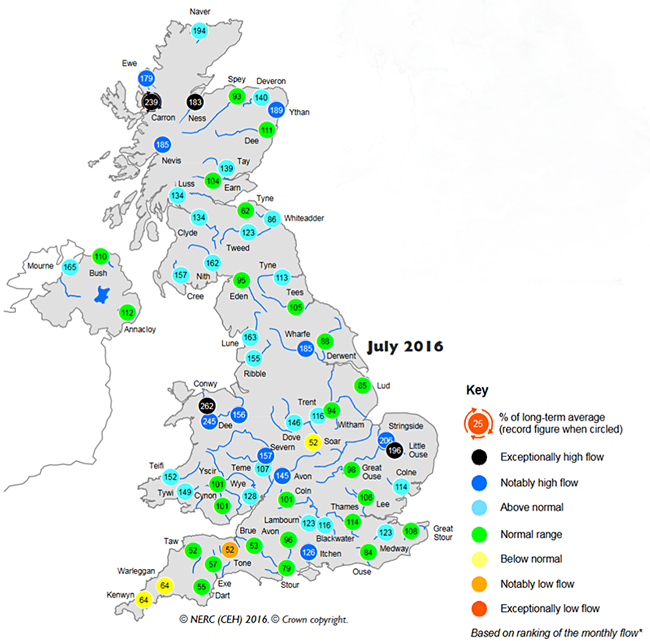 A PDF of the full 12-page July 2016 summary can be downloaded here.

The monthly summary is a look back at hydrological events occurring in July 2016. Latest information on flood warnings is provided by the Environment Agency, Natural Resources Wales and Scottish Environment Protection Agency (flood warnings for Northern Ireland are not available).

Read the full July 2016 Hydrological Summary for the UK