Prior to Storm Desmond’s arrival in early December the month of November was notably mild and dull in the UK, and very wet and windy in some parts. It was the third warmest November (in a record from 1910) for the UK and the dullest in a record from 1929.

November was also a stormy month, with a series of vigorous depressions bringing heavy rainfall and strong winds that caused significant disruption.

The persistent heavy rainfall in November effected a hydrological transformation in much of northern and western Britain. Many rivers that saw depressed October flows yielded exceptional flows in November, associated with floodplain inundations that caused disruption but generally modest impacts. These impacts were made much more severe in many areas by Storm Desmond. More information about the events of early December can be read in our Hydrological Update.

However, the exceptional rainfall eliminated soil moisture deficits in northern and western Britain which, along with the high late autumn river flows, has made many areas highly vulnerable to flooding in early winter (as witnessed in the first week of December). 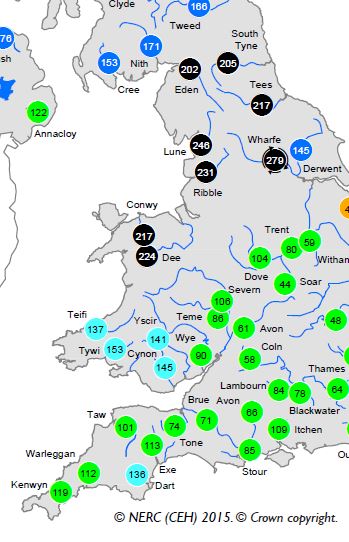 With the highest rainfall occurring across the upland gathering grounds of many major impoundments, reservoir stocks increased steeply (the third largest monthly increase in UK total stocks, in a record from 1995) and were above average in all but a few southern reservoirs.

Most rain-bearing systems made only a modest impression in the south. River flows and groundwater levels in the English Lowlands were moderately below average but mostly in the normal range. Overall, the water resources situation is favourable entering the winter.

A PDF the full 12-page November 2015 summary can be downloaded here.

The monthly summary is a look back at hydrological events occurring in November 2015. Latest information on flood warnings is provided by the Environment Agency, Natural Resources Wales and Scottish Environment Protection Agency (flood warnings for Northern Ireland are not available).

The Centre for Ecology & Hydrology jointly operates the National Hydrological Monitoring Programme (for the UK) in conjunction with the British Geological Survey. NHMP scientists produce the UK Monthly Hydrological Summary which assesses rainfall, river flows, groundwater and reservoir levels. They also operate the UK’s National River Flow archive. The NHMP also has a remit to analyse major flood and drought events in the UK and analyse long-term trends in UK hydrological data.

The UK Monthly Hydrological Summary is normally published on, or before, the tenth working day, of the following month. A Hydrological Outlook for the UK is also available, and is updated monthly.

Media enquiries related to the Hydrological Summaries should be directed to the CEH Press Office. Our scientists can provide explanation and analysis of historic hydrological patterns, possible future scenarios under climate change and scientific understanding of the current situation. We are not able to comment on immediate operational issues. If you wish to reproduce figures from the Monthly Hydrological Summary please respect the copyright credits contained within the document.