Human-induced climate change increased the risk of severe storms like those that hit the south of England in the winter of 2013/14, causing devastating flooding.

That’s according to new analysis from an international team of climate scientists, led by researchers at Oxford University and including scientists working for the Centre for Ecology & Hydrology. The research is published in the journal Nature Climate Change.

The research comprised an end-to-end study looking at the event from start to finish, taking in atmospheric circulation, rainfall, river flow, inundation, and properties at risk. During the 2013/14 floods, the worst-affected areas were Somerset, Devon, Dorset and Cornwall in the south west, and the Thames Valley in the south east.

The research made use of the weather@home citizen-science project, part of Oxford’s climateprediction.net climate modelling experiment, to model possible weather for January 2014 in both the current climate and one in which there was no human influence on the atmosphere. Researchers analysed more than a hundred thousand simulations of possible rainfall in the UK run by citizens from all over the world. The analysis also used the CLASSIC semi-distributed rainfall-runoff modelling system developed at CEH, and the CEH-Gridded Estimates of Areal Rainfall dataset. 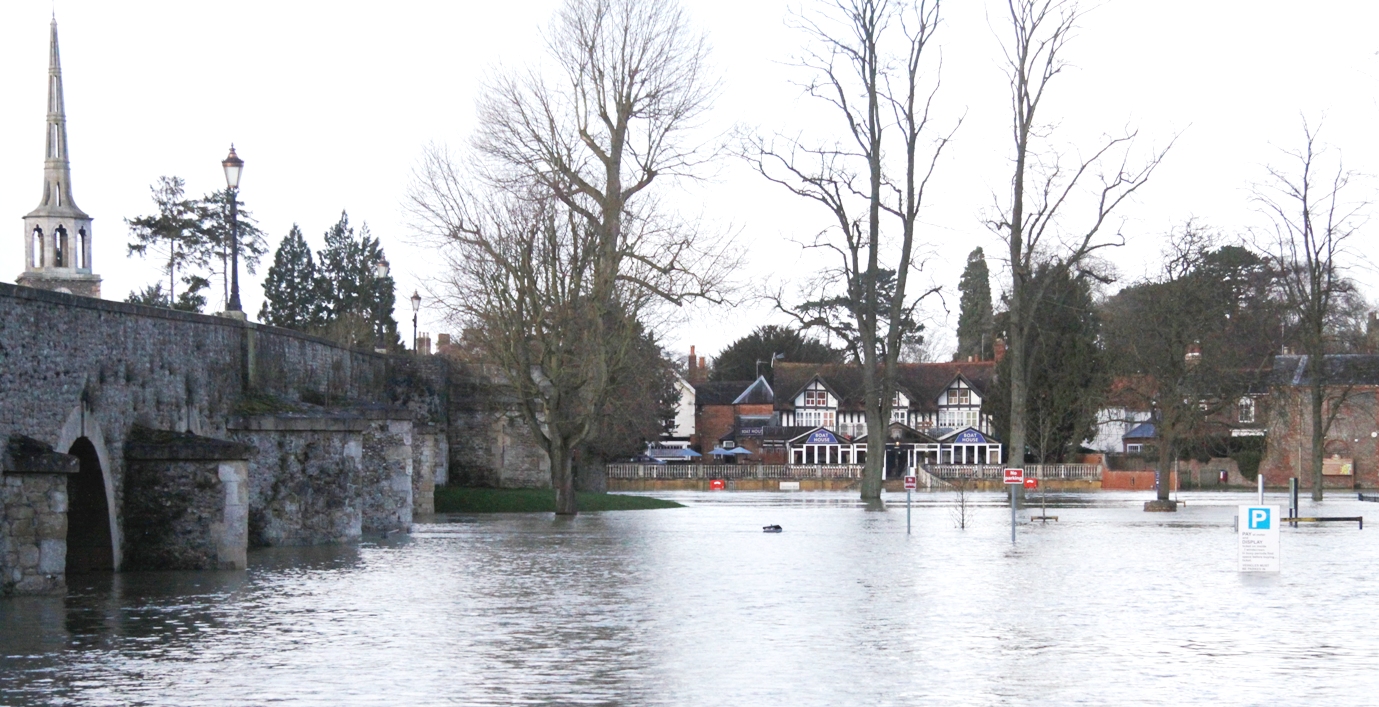 Lead author Dr Nathalie Schaller of Oxford University’s Department of Physics said, “We found that extreme rainfall, as seen in January 2014, is more likely to occur in a changing climate. This is because not only does the higher water-holding capacity lead to increased rainfall, but climate change makes the atmosphere more favourable to low-pressure systems bringing rain from the Atlantic across southern England.”

Co-author Dr Alison Kay from the Centre for Ecology & Hydrology said, “Our hydrological modelling suggests that the increased likelihood of extreme rainfall arising from man-made climate change gives a more modest increase in extreme flows in the River Thames. This highlights the importance of applying hydrological models in order to include the role of the landscape in transforming rainfall into river flows and floods.”

Co-author Dr Chris Huntingford from the Centre for Ecology & Hydrology said, “What this study reveals is that in a changing climate, assessment of altered rainfall patterns requires detailed assessment of atmospheric circulation changes. Extremes, by definition, are rare.  Hence the only way to understand changing probabilities in wind directions that influence rainfall is with large ensembles of climate simulations. Such ensembles are for pre-industrial and contemporary levels of atmospheric greenhouse gas concentrations. These allow all features of the chaotic system that is mid-latitude weather to be sampled. Oxford University remains the only academic centre to have built such a library of massive numbers of climate model simulations, collected through their citizen science project utilising people’s spare computer time.

"By collaborating with Oxford and other institutions, scientists here at the Centre for Ecology & Hydrology have contributed to translating such ensemble modelling outputs right through to implications for flood risk and associated costs.”

Co-author Professor Rob Lamb of the JBA Trust and Lancaster University said, “Each of these steps reflects different sources of uncertainty, but we find overall that there is a substantial chance of more properties having been placed at flood risk because of past greenhouse gas emissions, leading to potential damages that could be part of the losses incurred in 2013/14.”

The University of Oxford press office issued a press release to accompany the publication of the paper.

The paper ‘Human influence on climate in the 2014 southern England winter floods and their impacts’ was published online in Nature Climate Change on Monday 1 February 2016, DOI: 10.1038/NCLIMATE2927.