Solitary bees are twice as likely to pollinate the flowers they visit as their more sociable counterparts, according to a new study. 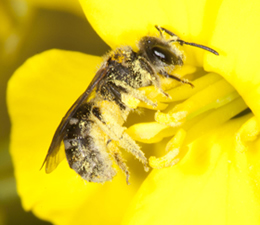 It says an oilseed rape flower visited by a solitary bee stands a 71 per cent chance of receiving pollen from the body of the bee. Should a bumblebee or honeybee stop by, those chances drop by half.

The research, published in Agriculture, Ecosystems and Environment, underlines the vital role that wild bees play in providing back-up pollination services to our struggling honeybee colonies, and the growing need to protect them.

"Underlying all of this is a lack of honeybees,” says Dr Ben Woodcock from NERC's Centre for Ecology & Hydrology, who led the study. “There simply aren't enough honeybee colonies in the UK to effectively pollinate all of our crops.”

“They're not going to do it alone; they need support from wild bee populations.”

The team spent two months on oilseed rape farms in Wiltshire, closely monitoring the bees as they meandered from flower to flower.

Solitary bees spent longer at flowers, and were more likely to have pollen available on their bodies than honeybees or bumblebees.

They and bumblebees also made more than twice as much contact with the stigma, the pollen-collecting part of the flower, as honeybees.

Honeybees are one of the UK's most important pollinators, often occurring in high numbers near managed colonies. But the number of managed colonies has fallen by more than half in 20 years, and a survey out last week says more than a third of UK hives have failed to survive the cold, wet winter.

Those declines have had a dramatic effect on honeybees' ability to pollinate crops. In 1984, they were capable of satisfying up to 70 per cent of pollen demand for UK crops, but a study in 2011 said that figure had dropped to just 34 per cent.

“For practical reasons hives are often clustered together in fairly small areas of the landscape, so you can get a scenario where wild bees make an important contribution to pollination away from those clusters.”

“They need species-rich grasslands, diverse field margins, and foraging resources that are available outside of the crop-flowering season.”