Loch Leven’s water quality has improved hugely over the past 25 years, according to research carried out by the NERC Centre for Ecology & Hydrology (CEH), Scottish Natural Heritage (SNH) and partners. 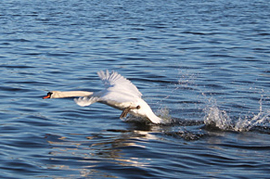 In June 1992, Loch Leven was visibly blighted by poisonous, blue-green algal blooms and murky water. The event became known locally as “Scum Saturday”. It was estimated to have cost the local community more than £1M in lost revenue. As a result, there were strong calls for action to stop it happening again and plans to clean up the loch were put in place.

Levels of pollution, mainly caused by excessive amounts of phosphorus entering the loch, have been falling over the last 25 years. This has led to improvements in water clarity, increases in the number and diversity of aquatic plants, and better habitat and more food for fish and birds. This has resulted from many years of hard work by the catchment management group, formed 25 years ago. The group and many others in the area have completed a number of innovative actions in the first catchment plan of its kind in Scotland.

Since then, SNH, SEPA, Scottish Water and Perth & Kinross Council, and others in the community, have worked hard to improve the water quality of the loch. Existing sewage works have been upgraded and a new one built, while local authority policies have been changed to ensure that strict waste water treatment arrangements are incorporated into any new build. Grass buffer strips on field margins have reduced soil erosion and the woollen mill has stopped discharging pollutants into the loch.

CEH has monitored the water quality at Loch Leven for almost 50 years. Over the first 20 years (1968-1987), the loch suffered serious degradations in water quality due to the combined effects of eutrophication (due to phosphorus from agriculture, sewage and industry), pesticide pollution and climate change. However, after management intervention in the early 1990s, the site underwent a slow, but sustained, recovery. Water clarity has improved, allowing light to reach down to deeper levels. By 2007, water quality had improved and aquatic plants (such as pondweeds and stoneworts) had returned to deeper water.

However, a recent study by CEH, SEPA, Perth & Kinross Council and SNH found that, while discharges to the loch from sewage treatment works and industry have been decreasing, phosphorus concentrations have started to increase again. This could be due to some septic tank systems not working as efficiently as others in some areas and to possible land use problems in the Pow Burn and South Queich areas. The management group is currently looking into these issues.

Dr Linda May of CEH, who has led the monitoring programme for the last twenty years, said, "The enormous improvement in water quality at Loch Leven over the last 25 years, and the associated improvements in food and habitat for wildlife, provide a world leading example of what can be achieved when scientific evidence is used to underpin restoration and management activities. Lessons learned at Loch Leven are now being used to inform lake restoration projects across the world, especially in developing countries. Our achievements at Loch Leven are frequently described by scientists and lake managers alike as 'inspirational'."

"The enormous improvement in water quality at Loch Leven over the last 25 years, and the associated improvements in food and habitat for wildlife, provide a world leading example of what can be achieved when scientific evidence is used to underpin restoration and management activities." Dr Linda May, NERC Centre for Ecology & Hydrology

Denise Reed, SNH Tayside & Grampians operations manager, said, "Thanks to the hard work of many organisations and people in the Kinross area, Loch Leven is in better shape now than it’s been for many years. But there’s still plenty of work to do and we and our partners are committed to doing everything that we can. It’s important to make sure that the loch’s water remains clean and healthy, so that wildlife can thrive and people can enjoy their visits to the loch even more.”

Scottish Natural Heritage issued a press release for this story.