A leaf-mining moth, which damages the UK’s iconic horse-chestnut trees, has been recorded for the first time in Ireland and Scotland. In response, a team of scientists have launched the ‘LeafWatch’ mobile phone app and are asking for help from the public to map its northwardly spread. 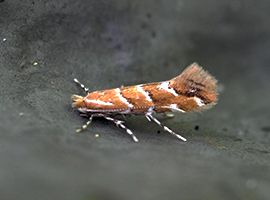 The moth, called Cameraria orhidella, is on the advance. It first arrived in the UK, in London, in 2002 and had reached Newcastle in 2010, where it temporarily stopped. However, last year it was reported in Dublin and Belfast and, for the first time, was spotted in Scotland. With the LeafWatch smartphone app anyone in the UK or Republic of Ireland can now record damage caused by the leaf mining moth and help scientists to monitor its spread.

It may only be the size of a grain of rice, but the horse-chestnut leaf-mining moth has impacts far greater than its tiny size suggests. Its larvae ‘mine’ the leaves of horse-chestnut trees producing brown blotches on the leaves. They can be so numerous that the tree’s leaves turn brown, making it look as though autumn has come early.

Dr Michael Pocock, organiser of the Conker Tree Science project and an ecologist at the UK’s Centre for Ecology & Hydrology, said, “New records of damage caused by the leaf-mining moth are really valuable to help us understand the way it is spreading. We are interested to know where it is, and where it isn’t. We need people to get involved right across the country and so created this citizen science app so that anyone can contribute to science.”

Dr Darren Evans, co-organiser of the Conker Tree Science project and a Reader in Conservation Biology at the University of Hull said, “All records are valuable, however take care not to confuse the damage caused by the leaf-mining moth with a fungal leaf blotch. The irregular brown blotches of the fungal leaf blotch are always ringed with yellow, something that is never seen on the leaf-miner blotches.”

Records of the presence or absence of the horse-chestnut leaf mining moth can be submitted via the LeafWatch app (available for Apple and Android devices) or via the Conker Tree Science website, where people can also record the fungal leaf blotch and the presence of bird attacks to the leaf-mining moth.

"New records of damage caused by the leaf-mining moth are really valuable to help us understand the way it is spreading. We are interested to know where it is, and where it isn’t." Michael Pocock, CEH 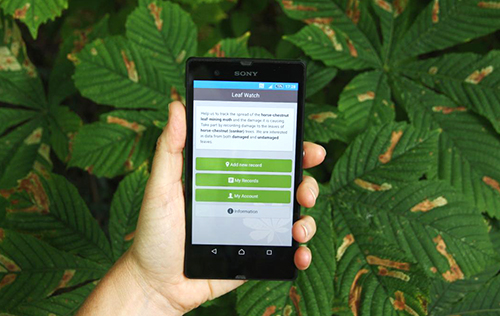 The first Scottish record of the leaf-mining moth came last September when it was noticed near Loch Tay by Dr Nigel Straw, an entomologist at Forest Research, who has been tracking the moth’s spread over the past decade. No other records have been confirmed in Scotland so far. Although records can be made from anywhere in the UK or the Republic of Ireland, the scientists especially welcome records of presence (and absence) of the leaf-miner from Scotland, Wales, Northern Ireland and the Republic of Ireland, and the north and south-west of England. All records will contribute to the Conker Tree Science citizen science project, running since 2010, which has already produced scientifically valuable results.

Horse-chestnut trees are popular, despite not being native to the British Isles, and they have been widely planted in parks and gardens since Victorian times. The damage from the moths affects the vigour of the tree, leading to smaller conkers, but a recent study surprisingly found no clear evidence that it affects the overall health of the tree.

CEH issued a press release for this story. Contact the Press Office for more information.

Conker Tree Science is a project in which anyone can take part in real hypothesis-led research. It was started in 2010 with two missions. The 8000 people involved in the project during 2010 and 2011 showed that both the amount of damage caused by the moth and the number of natural pest-controlling wasps increased with the number of years that the moth had been present in a location. In 2011 Conker Tree Science launched the LeafWatch smartphone app (for iPhones and Android) for people to record the damage to conker tree leaves.

LeafWatch app is available for Android and iOS users.