July 2010: a month of exceptional spatial contrasts in rainfall and river flow patterns within the UK

July was a month of exceptional spatial contrasts in rainfall and river flow patterns within the UK. At the national scale, July was the wettest month of the year thus far; more significantly, the highest rainfall totals broadly coincided with the regions of highest water resources stress. 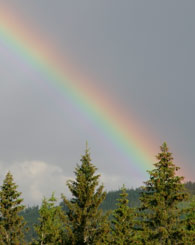 This analysis is contained within the latest monthly hydrological summary (for July) produced by the National Hydrological Monitoring Programme, operated by the Centre for Ecology & Hydrology in conjunction with the British Geological Survey.

In north-west England, western Scotland and north Wales, the rain (helped by the thin soils and steep slopes which aid runoff), generated exceptional mid-summer increases in reservoir stocks, easily the highest on record for July for several major reservoirs in the Lake District. In Scotland, the July level increase in Loch Katrine was also unprecedented (in a 17-year series). However, overall reservoir stocks for England and Wales for early August were the second lowest since 1996, with well below average stocks in some index reservoirs in the southern Pennines, central Wales and the South West.

July runoff was considerably above average for the UK as a whole and flood alerts were common mid-month but river flows are still depressed in some responsive southern, central and eastern catchments where soils remain notably dry (with associated agricultural stress).

Generally, groundwater level recessions continued throughout the major aquifer outcrop areas but groundwater levels, whilst mostly below average, are still within the normal range in most areas.

Over much of the UK, the 2010 drought moderated significantly through July but rainfall deficiencies increased in many eastern and southern catchments. In such areas above average late summer and autumn rainfall will be required to ensure that the seasonal recoveries in river flow, recharge rates and reservoir stocks are not be substantially delayed.

Media enquiries on the current flooding situation should be directed to the CEH Press Office. Our scientists can provide explanation and analysis of historic hydrological patterns, possible future scenarios under climate change and scientific understanding of the current situation. We are not able to comment on immediate operational issues.