Scientists presenting at the Royal Society Summer Exhibition in London have today (30 June) warned that the invasive harlequin ladybird is likely to threaten more than 1000 of Britain's native species. 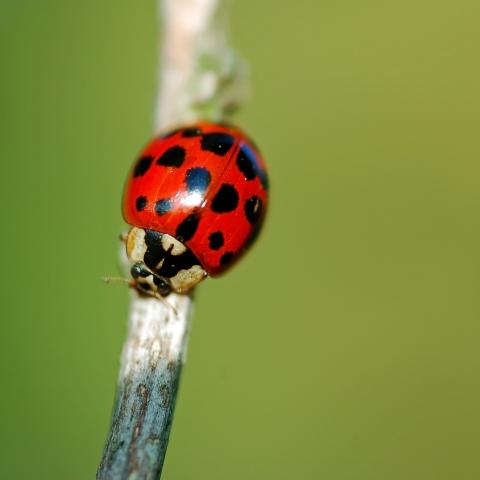 The harlequin has spread from Essex to Orkney in only four years and is now one of the fastest spreading non-native species in Europe, as well as the most invasive ladybird on Earth.

Dr Helen Roy of the Centre for Ecology & Hydrology is leading the project to monitor the harlequin's spread and impact on native species. She said the negative impact on Britain could be far reaching and disruptive, with the potential to affect over 1000 of our native species. "In the United States, where the harlequin arrived over 20 years ago, it has been associated with severe declines in native species, " Dr Roy explained.

The harlequin, native to Asia, was introduced to North America and continental Europe as a biological control agent because it eats more pest insects than any other ladybirds. Unfortunately, harlequins will also eat non-pest and beneficial insects, including the larvae of other ladybirds and the eggs and larva of butterflies and moths. Britain's 45 species of native ladybird and these other insects play a key role in our ecosystem, but the harlequin has the potential to jeopardise many of them.

After concerns in the 1990s that the harlequin would soon arrive in Britain, its appearance here was confirmed in 2004. Researchers' first step has been to understand its subsequent rapid spread. The public has played a key role in monitoring the invasion through the Harlequin Ladybird Survey website, which was launched in 2005 and has since received more than 30,000 online records. 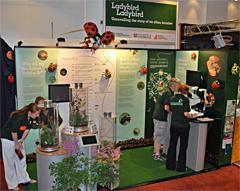 "Invasive alien species are one of the greatest threats to global biodiversity," says co-investigator Dr Remy Ware, from the University of Cambridge. "Using data from the Harlequin and UK Ladybird Surveys, we have a unique opportunity to study the early establishment, spread and adaptation of an invasive species."

The research team are now exploring how the few native enemies of the harlequin that do exist could be used to control the invasion. One idea is to use a sexually transmitted mite, which makes some ladybirds infertile. If the transmission of the mites could be encouraged, the harlequin population could become greatly reduced. Other possible control options involve fungal disease, male-killing bacteria, a parasitic wasp and parasitic flies.

The scientists will be on hand at the Royal Society exhibition, which runs until 4 July, to talk visitors through their research. Visitors can learn how to distinguish harlequins from native species, get up close and personal with harlequins under the microscope, and find out more about how scientists are trying to control the invasion

The Ladybird, Ladybird stand is the result of a collaboration between 15 scientists from five organisations - CEH, University of Cambridge (Peterhouse), Anglia Ruskin University, Rothamsted Research and the University of Hull. The Royal Society Summer Science Exhibition showcases cutting edge research in science and engineering from across the UK. It is held annually at the Royal Society, the UK’s national academy of science.

A press release was issued to accompany this story.

Details of UK Ladybird research can be found here.

Details of UK research on the Harlequin Ladybird can be found here together with a list of recent scientific publications.

A special issue book “From Biological Control to Invasion: the Ladybird Harmonia axyridis as a Model Species” (edited by Helen Roy, Centre for Ecology & Hydrology, UK and Eric Wajnberg, INRA, France) was published in early 2008 by the academic publisher Springer in association with the scientific journal BioControl. The book represented the collaborative effort of more than 50 scientists from Europe and USA and considered many aspects of the biology of this invasive alien species from distribution and abundance across Europe to potential impacts and possibilities for control.