Integrating science and policy to address the impacts of air pollution

An article in this week’s Science magazine by Dr Stefan Reis of the NERC Centre for Ecology & Hydrology (CEH) and colleagues from six countries examines how science and policy address air pollution effects on human health and ecosystems, and climate change in Europe. 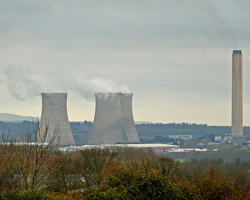 In a Policy Forum commentary entitled “From Acid Rain to Climate Change” Dr Reis and his colleagues discuss how scientists and policy makers working together have developed and implemented policies to improve air quality and reduce the impacts of air pollution on human health and ecosystems over the last decades.

The authors conclude that substantial improvements have been made, for example in reducing deposition of acidifying substances on soils and ecosystems in Europe since the 1970s. However there are still major challenges ahead. For example, emission levels of air pollutants in 2020 will still lead to an average loss of life expectancy by about four months, while excessive nitrogen deposition and consequent biodiversity loss will put more than 40 percent of Europe’s nature at risk.

The article highlights several examples where successful collaboration between scientists and policy makers is required to develop cost-effective air pollution policies that address serious environmental issues. Their priority list includes the need to further reduce nitrogen emissions, for example in the form of ammonia from agriculture, which will help to bring down acidification of soils and eutrophication of terrestrial, freshwater and marine ecosystems.

They also discuss the requirement for integrated policies working on the interactions between air pollution and climate change which would help reduce short-term climate forcers such as black carbon and ozone. They suggest that the United Nations Economic Commission for Europe's (UNECE) Convention on Long-range Transboundary Air Pollution (CLRTAP), a multilateral agreement aiming to reduce air pollution across the UNECE region, needs to work in partnership with the United Nations Environment Programme (UNEP), the Organisation for Economic Co-operation and Development (OECD) and conventions covering biodiversity, the marine environment and water.

Dr Reis, an environmental scientist at CEH, said, “The long-term collaboration of scientists and policy makers in the different task forces, working groups and other bodies of the Convention is crucial in forming a robust science-policy interface. Building trust in scientific results and a fostering a better understanding of the policy process ultimately leads to better, more efficient policies.”

Co-author Professor Martin Williams from King’s College London and Chair of the CLRTAP Executive Body, said, “The key role played by science as an integral part of the policy process in the Convention on LRTAP has been demonstrated again in the revised Gothenburg Protocol. In one of the few international environmental instruments to be agreed in this time of world-wide economic difficulty, science has helped steer a positive path through the problems and by incorporating the latest science at the boundary between air pollution and climate change, has pointed the way forward for the future of the Convention.”