Hydrological information and science from the Centre for Ecology & Hydrology

Staff at the Centre for Ecology & Hydrology working with our NERC colleagues at the British Geological Survey carry out a wide range of science and information management related to hydrological issues.

The current storm and flood events in the UK have thrown a spotlight on this work, both in the media and wider public debate.  Much of the work we do is carried out in partnership with other research institutions and the operational agencies across the UK including the Environment Agency, SEPA and Natural Resources Wales.

Monthly Hydrological Summary for the UK

The latest monthly hydrological summary for the UK [NEED NEW INTERNAL LINK] was published today, an analysis of water resources status across the country looking at river flows, groundwater levels, reservoir levels and rainfall. The monthly summary is a look back at hydrological events occurring in January 2014. For the latest information on new flood warnings please visit the Environment Agency website.

The monthly summaries are produced by the National Hydrological Monitoring Programme (NHMP), operated by the Centre for Ecology & Hydrology (CEH) in conjunction with the British Geological Survey.

Professor Alan Jenkins [NEED NEW INTERNAL LINK], Centre for Ecology & Hydrology (Director of Water and Pollution Science), said, “The long duration of the current flooding episode and its wide spatial extent make it an exceptional event. Relentless storm events over many weeks have combined to produce widespread flooding at a scale rarely seen in the UK. Several thousand homes have flooded and transport infrastructure has been disrupted across the UK.”

Professor Jenkins added, “The key to mitigating the impact of any flood is understanding that every catchment works in a different way. For example, the current flood situation on the Somerset Levels is the result of a different range of processes to those currently affecting the lower reaches of the River Thames. The operational agencies are doing a sterling job on the ground and it’s important to recognise that hundreds of thousands of homes have been protected by the UK’s flood defence infrastructure." 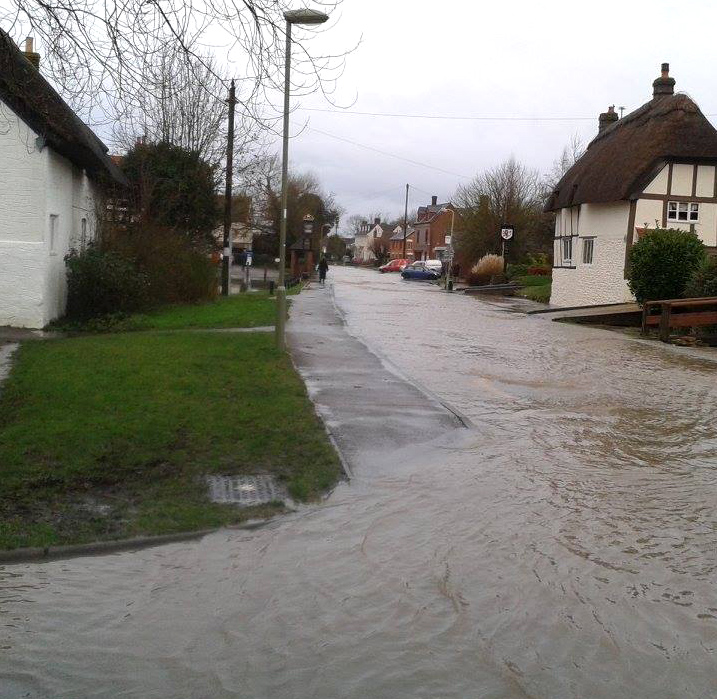 As well as producing the UK Monthly Hydrological Summary Scientists working on the NHMP scientists also operate the UK’s National River Flow archive, which provide historical context to the current situation. The NHMP also has a remit to analyse major flood and drought events in the UK and analyse long term trends in UK hydrological data. The team publish a series of occasional reports on major hydrological events [NEED NEW INTERNAL LINK], including reports on the UK's major flood events in 2000/2001, 2007 and 2012.

Hydrological Outlook for the UK

For some months the Centre for Ecology & Hydrology (CEH) has been working with a number of partners to explore the possibility of developing a long-range hydrological forecast for the UK. Forecasts of this type are already produced on an operational basis in a number of countries including the USA and Australia.

The latest Hydrological Outlook, updated each month, was published on Wednesday of this week. It focuses on the next three months but also looks further into the future. The outlook is available on the Hydrological Outlook UK website [NEED NEW INTERNAL LINK]. In addition to a high level summary document and methodological descriptions, a number of supporting information sheets are available to those who complete a simple registration process.

CEH's Grid-to-Grid (G2G) is used as the main hydrological model underpinning flood warning and forecasting by both the Environment Agency / Met Office Flood Forecasting Centre for England & Wales and the SEPA / Met Office Scottish Flood Forecasting Service for Scotland. The Grid-to-Grid hydrological model translates rainfall into river flows to predict potential river flooding. Intensive work on the Grid-to-Grid project began in 2002 at CEH and continues today in collaboration with the Environment Agency.

Nick Reynard, Science Area Lead for Natural Hazards, Centre for Ecology & Hydrology, said, “After the devastating summer floods of 2007 the Pitt Review carefully analysed all aspects of how this country prepares for and deals with flooding. Post Pitt there have been two key developments in the implementation of flood forecasting science to better predict both the risks and impact of flood events. The first is the development of the Flood Forecasting Centre, which combines meteorological and hydrological expertise to provide forecasts for all natural forms of flooding – river, surface water, tidal/coastal and groundwater. River flow forecasting is underpinned by the Grid-to-Grid model developed by the Centre for Ecology & Hydrology. The second significant development has been an increased focus on surface water flooding – many of the 55,000 homes affected in 2007 were flooded by a surface water event. Surface water flooding is a key focus of the recently formed Natural Hazards Partnership, which provides information, advice and analysis to government and emergency responders across the UK in the preparation, response and review of natural hazards, and brings together expertise from across the UK’s leading public sector agencies and research institutes.”

In 2012 CEH staff concluded a major project looking at "Future Flows and Groundwater Levels: British projections for the 21st century". The research looked at the impact of climate change on river flows and groundwater levels across England, Wales and Scotland and produced two unique datasets, which are now available via the CEH website, through the CEH Information Gateway and downloadable from the National River Flow Archive and National Groundwater Archive.

Professor Jenkins added, “Many potential solutions have been talked about over the last few weeks as ways of minimising flood risk. This is a complex issue and over the next few months it is important that experts from the key agencies and research institutes sit down and carefully analyse whether there are lessons to be learnt from the current flood episode.”

Finally scientists from the Centre for Ecology & Hydrology have provided many comments in recent weeks on the ongoing storms and flooding situation in the UK. You can find some of their quotes on this blog, or this earlier one.

Media enquiries related to the hydrological research at CEH should be directed to the CEH Press Office. Our scientists can provide explanation and analysis of historic hydrological patterns, possible future scenarios under climate change and scientific understanding of the current situation. We are not able to comment on immediate operational issues.