Understanding the links between grassland degradation and poverty in a remote region of China was the focus of a project workshop attended by international experts from the UK, Switzerland and China earlier this month.

Dr Nick Ostle from the Centre for Ecology & Hydrology (CEH) and Professor Richard Bardgett of Lancaster Environment Centre, who is leading the project, joined representatives from Chinese government agencies in Xining city to discuss problems caused by overgrazing on the grasslands of the Qinghai-Tibetan plateau, which covers a quarter of the land mass of China.

The grasslands in China are in a state of ecological crisis, threatening the livelihoods of farmers and traditional yak herders in what is already one of the poorest regions of China. It is estimated that about 80% of the rural poor in China live in grassland ecosystems and any further degradation of these will accelerate their poverty.

Dr Ostle said, "CEH scientists will be contributing to improved understanding of the causes of grassland degradation and its link to poverty in this region by developing ecologically meaningful predictive tools that can be used to restore the grassland to a healthy state. We are also interested in the interactions between climate change and pasture management, and potential feedbacks to the atmosphere across this region."

The workshop was funded by a development grant from the UK Ecosystem Services and Poverty Alleviation programme (ESPA), a seven-year multi-disciplinary research programme supported by the Natural Environment Research Council (NERC), Department for International Development (DfID), and the Engineering and Physical Sciences Research Council (EPSRC). The ESPA programme is part of the Living with Environmental Change partnership (LWEC). 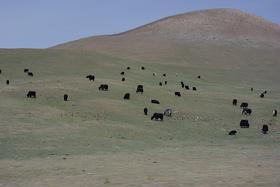