Scientists at the Centre for Ecology & Hydrology (CEH) have conducted an analysis of invasive non-native species occurrence in 48 countries to show that global trade networks play a key role in the distribution of invasions across Europe.

The CEH team of Dr Daniel Chapman, Dr Beth Purse, Professor Helen Roy and Professor James Bullock looked at more than 420 non-native plant pest species – including 173 invertebrates, 166 pathogens and 83 plants – to show that invasion was strongly linked to agricultural imports from countries in which the focal species were present.

The scientists used sophisticated statistical models to consider trade in all agricultural products, as well as live plants, forest products, fruit and vegetables and seeds. This showed that invasion was more strongly linked to the structure of global trade networks than to other possible ways in which the species could be spread, such as by airline routes or simply through geographic proximity. 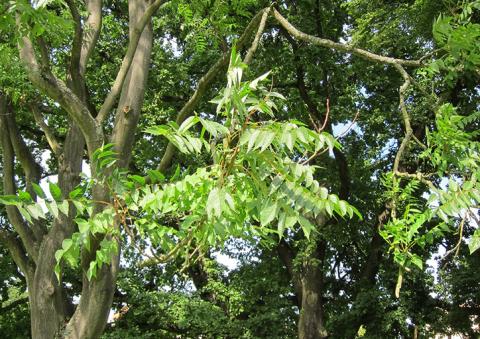 Tree of heaven (Ailanthus altissima) is a highly invasive plant

The results show that overall invasion is most strongly correlated to agricultural imports but that there is also a role for climate. Species presence in a climatically similar exporting country strongly increased the risk of invasion.

However, recent invasions were best explained by live plant imports from nearby countries, implying that dispersal of invasive non-native species among European countries dominates recent spread.

Dr Chapman, lead author of the study published in Global Ecology and Biogeography, says that "the assumption that global trade networks explain the large-scale distributions of non-native species remained largely untested until now."

The scientists also suggest that many non-native species are transported accidentally and that no data exists on their movement rates. Nevertheless, using data on trade flows it may be possible to better predict their arrival probabilities.

Professor Bullock, a senior co-author of the research, said, "Invasions are a major threat to biodiversity and human livelihoods globally and so predicting when and where invasions are likely to occur is increasingly important in an era of rapid global change.

"Long term prediction needs to take account of the evolution of trade and transport networks as a result of ongoing political and economic changes."

The study was funded by the Natural Environment Research Council’s National Capability funding to the Centre for Ecology & Hydrology.