A new global study published in the journal Nature has found that warming temperatures will drive the loss of huge amounts of carbon from soil by mid-century.

Critically, the study shows that carbon losses will be greatest in the world’s colder places, at high latitudes where huge amounts of carbon are stored, a finding largely missing from previous research, which has mainly been conducted in warm regions with small soil carbon stocks.

The research was led by Yale University working with researchers from across the world, including Professor Bridget Emmett and Dr Sabine Reinsch from the Centre for Ecology & Hydrology. 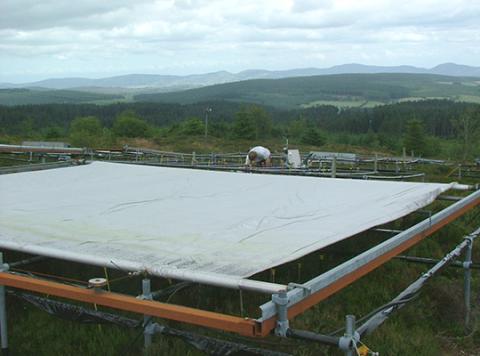 Scientists analysed data from dozens of warming experiments conducted in different regions of the world to generate a map revealing global patterns in the vulnerability of soil carbon stocks. It shows that the overwhelming majority of warming-induced soil carbon losses are likely to occur in Arctic and subarctic regions, where massive stocks of carbon have built up over thousands of years.

Most of the earth’s terrestrial carbon is stored in soil. The world’s soil carbon stocks are estimated to be circa 2000 gigatonnes (1 gigatonne = 1 000 000 000 000 kilograms) of carbon. The researchers found that warming will drive the loss of many gigatonnes of carbon from the soil to the atmosphere, which in turn can accelerate climate change even further, and so drive more carbon loss.

Data was provided from the Centre for Ecology & Hydrology’s climate change manipulation experiment, which has been running for 17 years in Clocaenog forest, a Welsh upland peatland – a system predicted to be highly vulnerable to climate warming. At the field site, increasing temperature and drought were imposed on the vegetation to study the effects of climate change on various ecosystem processes.

Dr Sabine Reinsch, a soil ecologist at the Centre for Ecology & Hydrology and a co-author on the paper, said, "Long-term climate change experiments like this are of immense value because plants and soils respond to changes in temperature and rain differently at different time scales."

"Quick changes of soil processes in response to high temperatures or drought spells can occur within days or weeks, but these are often reversible. The long-term, often irreversible, changes of ecosystems, such as increased soil carbon loss or soil degradation, occur over years and decades and these are the responses we are most interested in.”

"Long-term climate change experiments like this are of immense value because plants and soils respond to changes in temperature and rain differently at different time scales." Dr Sabine Reinsch, CEH

The Nature paper considers only soil carbon losses in response to warming. There are several other biological processes — such as accelerated plant growth as a result of carbon dioxide increases — that could dampen or enhance the effect of this soil carbon feedback. Understanding these interacting processes at a global scale is critical to understanding climate change, the researchers said.

Yale University issued a press release about this research.