Hydrologists from the Centre for Ecology and Hydrology (CEH) are collaborating with the World Meteorological Organization (WMO) on a pilot hydrological status and outlook system to help countries prepare better for flood and drought situations.

CEH and WMO are jointly convening a meeting of the world’s leading hydrologists in Uganda from 26 to 29 September 2017 to scope out a four-year plan to deliver the global WMO Hydrological Status and Outlook System (HydroSOS).

The scientists will assess how HydroSOS can be developed to help deliver the United Nations Sustainable Development Goal 6 which stresses the importance of attaining human health, environmental sustainability and economic prosperity through access to safe water and sanitation and sound management of freshwater ecosystems.

HydroSOS – the first such worldwide monitoring system of its kind – aims to bring together and build upon existing regional and national systems, such as CEH’s Hydrological Summary and Outlook for the United Kingdom, which are updated on a monthly basis.

According to the World Resources Institute, there are 20 million people around the world at risk from flooding – and this figure could rise to 50 million in the next 15 years. However, there is currently no global hydrological monitoring and reporting system to warn of impending flood or drought situations that could devastate millions of people.

“HydroSOS builds on WMO initiatives on hydrological monitoring, data sharing and seasonal meteorological forecasting to deliver accessible and actionable hydrological information, especially flood and drought impacted populations,” said Johannes Cullman, Director of the WMO Climate and Water Department. Professor Alan Jenkins, Deputy Director at CEH, who will Chair the WMO Task Team taking forward HydroSOS said, “With the many challenges posed by climate change and a rising global population the need to have in place an operational global system capable of assessing the current status of surface or groundwater systems and how they will change in the coming weeks or months, is becoming more acute.”

It is anticipated that HydroSOS will use a combination of local scale ground-based data, global scale remotely-sensed satellite data, global/regional weather and climate forecast models and global hydrological models to help inform government bodies, regional and international aid agencies and the general public of expected flood or drought situations. 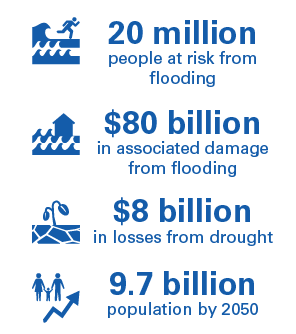