A new assessment of the impact of climate change on river flows and groundwater levels across England, Wales and Scotland has been published by the NERC Centre for Ecology & Hydrology (CEH) and the NERC British Geological Survey. 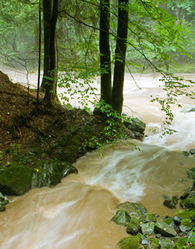 The Future Flows and Groundwater Levels project (FFGWL) has produced unique datasets, which are now available via the CEH website, through the CEH Information Gateway and downloadable from the National River Flow Archive and the National Groundwater Archive.

Climate change is expected to increase temperatures and change rainfall across England, Scotland and Wales. In turn, this could modify patterns of river flow and groundwater recharge, affecting the availability of water and changing the aquatic environment. Although there have been many studies of the impact of climate change on river flows in different parts of the UK, coverage has been uneven and methods have varied. This has meant that previously it has been very difficult to compare between different locations and hard to identify appropriate adaptation responses.

Scientists working on the Future Flows and Groundwater Levels project spent two years carrying out a consistent assessment of the impacts of climate change in Great Britain using the latest climate projections from the UK Climate Impact Programme, including the UKCP09 probabilistic climate projections. The products arising from the project will be used in developing climate change adaptation policy, studying the impact of climate change on water availability, improving river basin management, and evaluating the impact of climate change on aquatic ecology. They have already been used in the Environment Agency's "Case for change - current and future water availability" document that underpinned the Defra Water White Paper, published in December 2011. 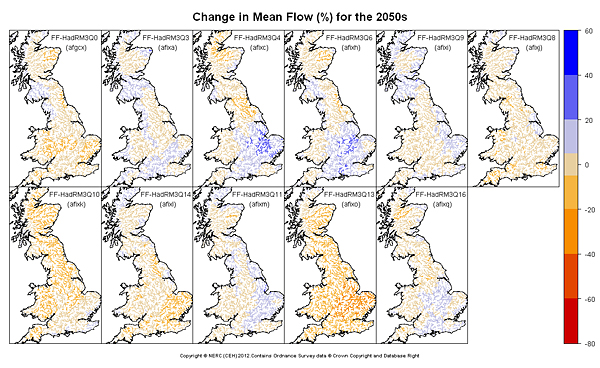 The main outputs from the project are two unique datasets (Future Flows Climate and Future Flows Hydrology) covering Great Britain, both made available to the public under specific licensing conditions and referenced by a Digital Object identifier (DOI). They represent a nationally consistent ensemble of 11 plausible realisations (all equally likely) in river flow and groundwater regime of nearly 150 years.

They enable investigation, nationally, of the role of climate variability on river flow and groundwater levels and how this may change in the future. Some climate change uncertainty is accounted for by considering all ensemble members together.

Project leader Dr Christel Prudhomme, of the NERC Centre for Ecology & Hydrology, said, "This is the first time river flow and groundwater time series, together with their forcing climate data characterising climate variability and change from 1950 to 2098, have been made available to the public at the Great Britain scale. This makes possible water-related impact studies at all scales from local to national."

Future Flows Hydrology datasets are associated, for each study site, with a fact sheet summarising the main modelling performance so that the user can make informed interpretation according to the quality of the simulations. For a sub-selection of locations (30 rivers and 24 boreholes), changes from Future Flows Hydrology are put into the context of the fuller climate change uncertainty captured by UKCP09 scenarios. They show that generally Future Flows Hydrology captures the range of climate uncertainty and possible climate variability expected in Great Britain from the latest climate change modelling.

"The end result is a great example of successful collaboration between scientific researchers, operational agencies and the private sector."

Dr Prudhomme added, “The Future Flows and Groundwater Levels project only scratched the top of the iceberg. Our future plans include gaining a better understanding of the wider impact and of the vulnerability of rivers to climatic changes, of climate changes on water-related issues, analysing future trends and their variation in space and undertaking a full assessment of how well the Future Flows data describe hydrological extremes such as droughts and floods. I hope this will be achieved through new collaborations and partnerships and also with the study of Future Flows Climate and Future Flows Hydrology datasets by scientists and the general public and their feedback to the project team, allowing us all to improve knowledge of climate change impacts.”

The Future Flows and Groundwater Levels project was co-funded by the Environment Agency of England and Wales, Defra, UK Water Industry Research, the NERC British Geological Survey, the NERC Centre for Ecology & Hydrology, and Wallingford HydroSolutions.

Dr Prudhomme concluded, “This project is the result of tremendous efforts of nearly 30 scientists and data managers from two NERC Research Centres and the NERC spin-out company Wallingford Hydro Solutions. The work would not have been possible without the support of the Environment Agency, Defra and UK Water Industry Research and in particular of the members of the project board. The end result is a great example of successful collaboration between scientific researchers, operational agencies and the private sector.”

Environment Agency - The Water White Paper and Case for Change