A new European study has found that soil carbon loss is more sensitive to climate change compared to carbon taken up by plants. In drier regions, soil carbon loss decreased but in wetter regions soil carbon loss increased. This could result in a positive feedback to the atmosphere leading to an additional increase of atmospheric CO2 levels.

The research was led by Dr Sabine Reinsch and Professor Bridget Emmett from the UK-based Centre for Ecology & Hydrology (CEH) in collaboration with European and US climate scientists and published in the Nature journal Scientific Reports. 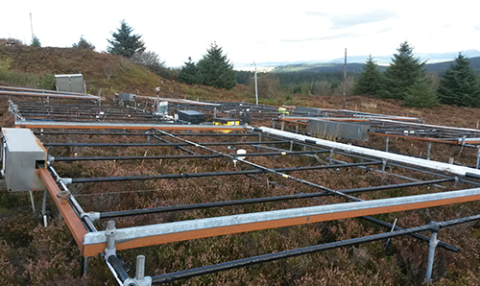 Most of the earth’s terrestrial carbon is stored in soil. The world’s soil carbon stocks are estimated to be circa 2000 gigatonnes (1 gigatonne = 1 000 000 000 000 kilograms) of carbon. The researchers showed that drought decreases and increases soil carbon more predictably than warming.

Data was provided from CEH’s climate change manipulation experiment, which has been running for 18 years in Clocaenog forest, a wet Welsh upland site with a peat layer resulting from seasonal waterlogging. At the field site, increasing temperature and drought were imposed on the vegetation to study the effects of climate change on various ecosystem processes.

Dr Sabine Reinsch, the lead author on the paper and a Soil Ecologist at the Centre for Ecology & Hydrology, said, “This cross-European study enabled us, for the first, time to investigate plant and soil responses to climate change beyond single sites.

"Putting ecosystem responses to climate change into the wider context of natural climate gradients helps us to understand the observed responses of plants and soils better."

Professor Claus Beier, Head of Department of Geosciences and Natural Resource Management at the University of Copenhagen, Denmark and co-author on the paper, said, "The study highlights and illustrates new and fundamental understanding related to the response of ecosystems to climate change.

"By conducting the same experiment at different moisture and temperature conditions across the European continent, it has become clear and visible how the pressure from climate change factors may act differently, and sometimes even opposite, across these conditions.

"These differences are important for our overall assessment of future ecosystem responses to climate change, but the study also shows that they can be understood and to some extent predicted."

"The study illustrates new and fundamental understanding related to the response of ecosystems to climate change." Dr Sabine Reinsch, Centre for Ecology & Hydrology

Dr Marc Estiarte, researcher at Spanish research centre CREAF-CSIC and co-author on the paper, said, "In contrast to the soils, reducing precipitation was not a threat to plant productivity in wetter sites, and in the drier sites plants resisted proportionally more than in intermediate sites, whose aboveground productivity was shown more sensitive. This illustrates the clear difference in sensitivity of the soils compared to the plants across the climate gradient."

Professor Bridget Emmett, Soil Science Area lead and head of site at the Centre for Ecology & Hydrology, Bangor, said, "These results emphasise how sensitive soil processes such as soil respiration are to environmental change.

"This sensitivity in wetter systems, combined with a decoupling from plant productivity, represents an important potential positive feedback to the atmosphere which could lead to an increase of atmospheric CO2 levels."

Understanding the responses of plants and soils in other biomes will provide a better understanding of climate change and the effects on global plant and soil interactions and the feedbacks to climate.

CEH issued a press release for this story. For interview and image requests, please contact the CEH Press Office.