Plants often regarded as common weeds such as thistles, buttercups and clover could be critical for safeguarding fragile food webs on UK farms, according to new research published in Science this week. 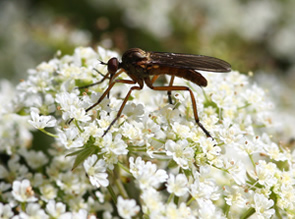 The scientists looked at multiple ecological networks, such as food webs, seed dispersal networks and pollinator networks on a whole-farm scale.

Their research details the interactions that occur between the different food webs commonly found on farms throughout the UK and the robustness of these interactions to species loss. In one of the first studies to look simultaneously at multiple types of food webs, the researchers found that some plants, such as thistles, cow-parsley, clover and buttercups, were disproportionately well linked to animals through the food web.

The research also showed that the different networks varied in their robustness. Bees, butterflies and other pollinators are more susceptible to changes in their environment, making them more fragile than other networks. The findings highlight the importance of ensuring an agri-ecosystem approach is taken in land management practice to enhance biodiversity on UK farmland.

The team of researchers was originally based at the University of Bristol, although Dr Michael Pocock is now with the Centre for Ecology & Hydrology (CEH).

Professor Jane Memmott from the University of Bristol led the study. She said: “If ecologists, land managers and policymakers want to manage farmland diversity, they need to understand the way species are linked to each other, since these links can have a huge impact on a community’s response to species loss, species restoration and the provision of ecosystem services such as pollination and pest control.” 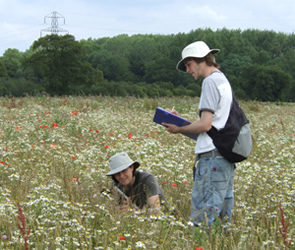 Dr Michael Pocock said the findings offered good and bad news for biodiversity. “We already know that some wildlife groups such as pollinators and birds are declining on our farms." he explained. "Our research suggests that focusing on the sustainability of one group of animals may not bring benefits to others. However we did find that restoring particular plants such as buttercups, thistles and clover could, theoretically at least, rapidly increase biodiversity across the farm.”

Dr Darren Evans, formerly of CEH but now at the University of Hull, was also involved in the research. He added: “With over three-quarters of the land area of the UK under agricultural production, we hope our findings will encourage land managers to consider food webs and other ecological networks as a practical tool for managing biodiversity on farmland.”

The research was funded by the BBSRC. Professor Douglas Kell, BBSRC chief executive, said global food security was one of the major challenges facing us all this century. The big question, he said, is "how do we feed a rapidly rising global population sustainably?"

"Drawing on expertise from across the bioscience community is crucial in order to set about answering this." Professor Kell continued. "This research highlights the crucial importance of understanding our agricultural environment to ensure we protect biodiversity and harness its natural capacity to aid sustainable agriculture across the UK and beyond.”

The research is published in Science. The full paper reference is "The robustness and restoration of a network of ecological networks". Michael J O Pocock, Darren M Evans, Jane Memmott. DOI: 10.1126/science.1214915

Why is sustainable food production an issue? [PDF, 0.7MB]

BBSRC issued a press release for this story.