Experts from 25 countries are in Edinburgh this week to agree how to reduce emissions of ammonia from agriculture. Ammonia emissions to the air, which contribute to particulate matter formation in the atmosphere, are a major human health threat across Europe, and cause loss of biodiversity in many of our most vulnerable ecosystems.

Over two days (12-13 November) the experts are completing a new “Ammonia Framework Code". Efforts to reduce air pollution threats to human health and ecosystems have so far focused on energy use, industry and transport sources. However, a key UN agreement called the ‘Gothenburg Protocol’ also includes commitments to reduce emissions of ammonia from agriculture. One of its requirements is that each signatory country “shall establish, publish and disseminate an advisory code of good agricultural practice to control ammonia emissions".

The Scottish Government has welcomed the work. Environment and Climate Change Minister Paul Wheelhouse said, “While progress has been made, air quality remains a key priority for the Scottish Government and I welcome the work to establish a United Nations Framework Code to reduce ammonia emissions. The hosting of this key meeting in Edinburgh reflects our leadership in this area. Scotland’s livestock and arable sectors deliver top quality products for the world market.

"By managing our nitrogen better, we can also make sure we are getting the very best for the environment and our challenging climate targets.” 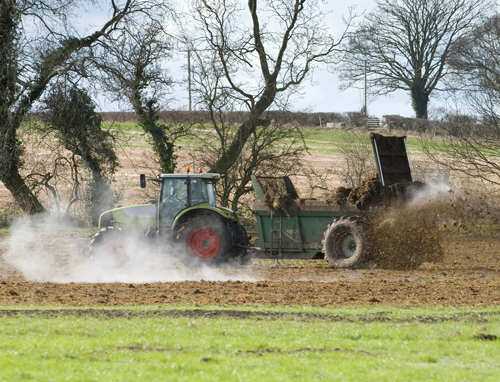 Workshop host Professor Mark Sutton, from the UK’s Centre for Ecology & Hydrology, emphasised that the meeting is about building consensus and wider understanding.

He said, “Ammonia is incredibly important for our natural environment, so it is amazing that so few people have heard about it. Manufacturing of ammonia for fertilizers uses huge amounts of energy, and has doubled the flow of nitrogen compounds around the world, with 80% of this being lost to the environment. Ammonia pollution is one of the main loss pathways, so establishing National Ammonia Codes is critical to reducing pollution while improving farm nitrogen efficiency.”

Key provisions highlighted in the draft Ammonia Code include:

A first Ammonia Framework Code was published in 2001. Professor Sutton added, “There was very little public awareness about this code when it was signed in 1999. It was not even translated into EU legislation. As a result, only about 10 out of 26 ratified countries have so far met the requirement to establish their own national code.

"It is therefore vital that we get the message out. We need to emphasise how both farmers and the environment can benefit, meeting air pollution targets, while helping achieve climate and water goals at the same time.”

The Framework Code is being written as part of the Geneva Convention on Long-range Transboundary Air Pollution, under which the Gothenburg Protocol was signed. It will offer a model to help countries establish their own national codes. It been prepared by the Convention’s ‘Task Force on Reactive Nitrogen’ (TFRN), chaired by Professor Sutton, and sets out provisions for reducing ammonia emissions to the air, which contribute to particulate matter formation in the atmosphere, a major human health threat across Europe, and to loss of biodiversity in many of our most vulnerable ecosystems.

The outcomes of the Edinburgh workshop will feed directly into a meeting of the Executive Body of the LRTAP Convention, in Geneva next month (8-12 December), where it is planned that signatory countries will adopt the new Ammonia Framework Code. This should provide a key impetus for Parties to update their own national Ammonia Codes, or establish one if they have not yet done so.

Prof Sutton also chairs the International Nitrogen Initiative (INI). He led the European Nitrogen Assessment, as well as the Our Nutrient World report for the United Nations Environment Programme. Through his work he has highlighted the contrast between the use of nitrogen for explosives in war versus their benefits for food production, emphasizing the need to address both nitrogen use efficiency in agriculture and the food choices of European citizens, if the global impacts of nitrogen on the environment are to be reduced.