Findings from a major Europe-wide study into cormorant-fishery conflicts were published this week, providing one of the most detailed ecological and socio-economic investigations of these fish-eating birds, their impacts and implications for their management. 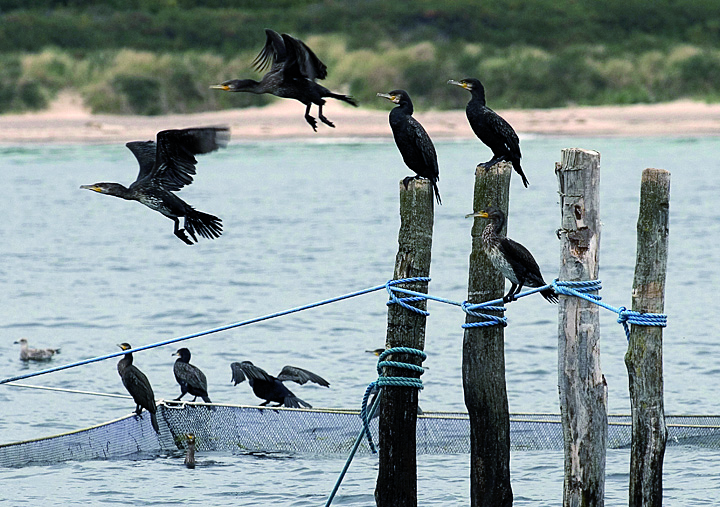 Cormorant numbers across Europe have been increasing, particularly within the last three decades, for a range of reasons including protection from persecution, the effect of improved food sources, for example as a result of nutrient enrichment and fish farms, and changes in pollution levels.

However, the enlarged cormorant populations have led to significant conflicts in many parts of Europe with recreational and commercial fisheries, and fish farms. For this reason, an interdisciplinary network of almost 70 researchers from 30 countries contributed to the ‘INTERCAFE: Interdisciplinary Initiative to Reduce Pan-European Cormorant-Fisheries Conflicts’ project which was funded through the EU COST Action programme.

INTERCAFE was chaired by David Carss, a vertebrate ecologist from the Centre for Ecology & Hydrology (CEH), and drew together researchers from a number of disciplines, including bird-related and broader ecology disciplines, fisheries science and management, sociology, social anthropology and international law, together with experts on fisheries production, harvest and management, local interest groups and international policy-makers.

The INTERCAFE final reports give fisheries managers, conservationists, researchers and decision-makers scientific data and wide-ranging information on the key factors influencing cormorant ecology and cormorant movements throughout the year at the European scale. They also provide a wealth of experiences, as well as practical measures and options for considering and addressing cormorant-fishery issues across Europe from ecological, social, cultural and legal perspectives.

David Carss of CEH said, “This COST Action brought together a wide range of people – both scientific researchers and those on the ground who are affected by cormorant-fisheries issues through their work, livelihoods, and recreational pursuits. The large number of people involved with INTERCAFE deserve great credit for the time, commitment and dedication they gave so freely to the project on a voluntary basis. They and the authors of the reports should take considerable satisfaction at the publication of these final reports. But to refer to the outputs as ‘final’ is really a misnomer. They are certainly not the last word on cormorant-fishery matters; rather, they provide an important and comprehensive synthesis of the subject, not only from a scientific but also from a social, cultural and legal point of view. As such, the reports could be considered a milestone with respect to the examination of cormorant-fishery conflicts across Europe.”

"The reports could be considered a milestone with respect to the examination of cormorant-fishery conflicts across Europe."

He added, “The challenge of the COST action during INTERCAFE was to address the cormorant-fishery issue from ecological, socio-economic, and practical perspectives. This interdisciplinary approach, together with a pan-European assessment and synthesis of the available information at the continental scale, provided many new insights in this challenging field. For example, we are now aware that the geographical position in Europe, as well as the nature of local people’s relationships with wetland habitats, determines to a large part how the conflict is perceived.”

There are five main reports from the project which cover:

Mennobart van Eerden, cormorant expert and ecologist at Rijkswaterstaat, the Dutch Ministry of Infrastructure and Environment, explained, “For the first time we succeeded in a pan-European assessment of cormorant numbers and distribution with the help of hundreds of volunteers of the Wetlands International-IUCN Cormorant Research Group, an enormous achievement and an extremely useful baseline in the debate about conflicts.”

Together with co-workers in the INTERCAFE project he was able to relate the data on distribution and numbers to ecological requirements. Dr van Eerden added, “We can now show that cormorant numbers relate to the availability of natural resources over huge surface areas of Europe, and they are strongly influenced by natural and man-made events many hundreds or even thousands of kilometres away.”

His comments were echoed by Ian Russell, of the UK Government agency Cefas, the Centre for Environment, Fisheries and Aquaculture Science, and joint author of the INTERCAFE Cormorant Management Toolbox, “Managing cormorant-fishery conflicts is indeed complex and influenced by many factors. There is thus no one-size-fits-all solution to any particular ‘problem’. There are, however, numerous tools available and ample evidence that these can prove effective in some places at some times. The Toolbox aims to inform those addressing conflicts, help them to identify the most appropriate management techniques to use, and encourage them to devise and develop ever more effective techniques.”

INTERCAFE (Interdisciplinary Initiative to Reduce pan-European Cormorant-Fisheries Conflicts) was a COST Action project. The main objective of INTERCAFE was to improve European scientific knowledge of cormorant-fisheries interactions in the contexts of the interdisciplinary management of human:wildlife conflicts and of sound policy formation, so as to inform policy decisions at local to international levels across Europe and to deliver a coordinated information exchange system. Cormorant-fisheries conflicts are a truly pan-European issue being experienced by a variety of stakeholder groups in a diverse range of aquatic habitats across the continents. An interdisciplinary approach involving the collaboration of biological and social scientific expertise, economic and political interest and practical local experience is now seen as vital to the development and successful implementation of practical cormorant-fisheries conflict management strategies across Europe.

COST – European Cooperation in the field of Scientific and Technical Research –  a system for research networking in Europe based on an inter-governmental framework. COST’s mission is to strengthen Europe in scientific and technical research through the support of European cooperation and interaction between European researchers. Funds provided by COST support the coordination costs of research networks (‘Actions’). INTERCAFE was COST Action 635 and further details can be found here.