A new scientific paper published this week in Nature Climate Change has outlined metrics to distinguish between the impact of long and short-lived greenhouse gas emissions on rates of global warming. 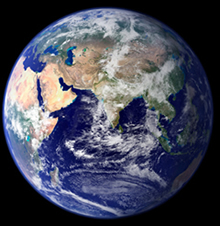 Climate policies address emissions of many greenhouse gases including carbon dioxide, and others such as methane, nitrous oxide and various halogen-containing compounds. These are aggregated and traded on a CO2-equivalent basis.

So far, methods for doing the aggregation have received criticism as a tool for policy. This is because some do not relate directly to temperature and do not clearly signal the need to limit cumulative totals for long-lived gases such as CO2.

To start addressing these points, a team led by Stephen Smith of the Committee on Climate Change, working with scientists from the NERC Centre for Ecology & Hydrology, the Met Office Hadley Centre and the University of Oxford, has published the paper entitled "Equivalence of greenhouse-gas emissions for peak temperature limits".

Dr Chris Huntingford, from the NERC Centre for Ecology & Hydrology, was one of the paper co-authors. He said, "This paper sets out two metrics, for long- and short-lived greenhouse gases respectively, linking emissions of both to maximum level of global warming. By using temperature-based metrics it is now significantly easier to understand what emissions profiles could keep the planet below, for instance, the two-degrees warming threshold above pre-industrial temperature values. The metrics allow a direct method to compare cuts in longer-lived gases such as carbon dioxide, and shorter-lived ones such as methane.

Dr Huntingford continued, "As might be expected, it is the cumulative emissions of long-lived gases that influence most any peak level of warming, whereas for short-lived gases, then sustained changes to emissions rates at some future point will have most effect. This work formally characterises those two cases and any proposed future balance between them."