Ecologists get first bumblebees' eye view of the landscape

Ecologists have produced the most detailed picture yet of how bumblebees use the landscape, thanks to DNA technology and remote sensing. The results – which come from the largest ever study of wild bumblebee nests – could help farmers and policy makers ensure the countryside is better suited to the needs of these vital but declining pollinators. 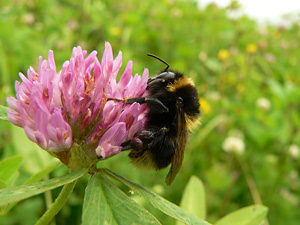 Despite their size and often conspicuous colouring, bumblebees are difficult to study in the wild because their nests are almost impossible to find. To work out how far bumblebees forage from their nests, a team led by ecologists from the Centre for Ecology & Hydrology (CEH) and including the University of East Anglia, University of Bristol and Institute of Zoology instead took advantage of bumblebees' unusual genetics.

According to Dr Matt Heard of CEH, “All workers in a bumblebee colony are daughters of a singly-mated queen, which means they are highly related in genetic terms. We decided to exploit this interesting aspect of their biology using a novel combination of genetics, field studies and landscape modelling.”

The team sampled DNA non-lethally from live wild bumblebees, including 2577 worker and 537 queen bees of five different species. Back in the laboratory they genotyped the samples, which allowed them to estimate how closely related the bees were across the landscape and group sisters, mothers and daughters into more than 2000 colonies.

This information was then overlaid onto detailed images of the study landscape taken by airborne remote sensing. The maps allowed the team to estimate the location of each colony as well as how far each bumblebee travelled to find food. These distances varied between averages of 268m to 553m depending on species, but were much greater, over 2km, for colonies in parts of the landscape with fewer flowers.

The results are important because they will allow policy makers and farmers to improve conservation schemes. “By using the secrets hidden within the DNA of bumblebees we can start to understand how queens and their colonies are using the landscape around them. Most importantly, we can ask whether conservation schemes to improve the countryside for bees, like planting more flowers on farmland, are having a positive effect. For example, reducing the distance that bumblebees have to fly to find food might increase their 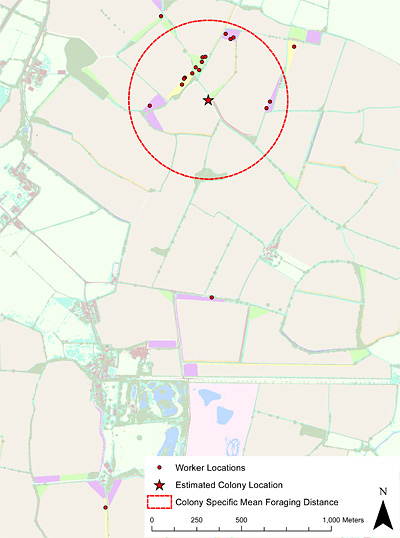 chances of survival into the next generation because they can devote more energy to reproduction,” explained Dr Heard.

"Our findings could help land managers to plan schemes to help conserve bumblebee populations in both agricultural and urban areas, and to enhance pollination services for crops and biodiversity.”

Map showing locations of 19 worker bumblebees (red dots) across a farm from a colony of the nationally rare species Bombus ruderatus. DNA samples from the bees were used to identify them as sisters from the same colony. This information allows the location of their nest (red star), and the average foraging distance of the bees (red line) to be estimated.

Under current agri-environment schemes, the UK Government pays farmers to manage their land for the benefit of particular habitats and species. However, the area targeted for bees and other pollinators is less than 0.1% of the total managed area. Bumblebees are among the most important pollinators of many food crops and wild plants.

The next stage of the research is to use mathematical models to produce a “bees' eye view” of the landscape. Dr Claire Carvell of CEH, the project leader, said, “Ultimately we want to be able to predict which types of landscapes work best for bumblebees and how these can be created against the backdrop of modern farming and the need for sustainable food production”.

Dr Heard presented the team’s findings to INTECOL at ExCel, London on Thursday 22 August 2013. He and Dr Carvell are working with Professor Andrew Bourke at the University of East Anglia, Dr Seirian Sumner and Dr Stephanie Dreier at the University of Bristol, and Dr Jinliang Wang at the Institute of Zoology. The research is funded by the national Insect Pollinators Initiative.

The British Ecological Society issued a press release for this story.

A round-up of CEH news from INTECOL 2013 can be read on our blog.