Creating wildlife habitats by removing up to 8% of agricultural land from production has little effect on - and can even increase - crop yield, new research from the Centre of Ecology & Hydrology shows.

The experimental study, published in the Royal Society's Proceedings B journal, provides the first direct evidence for the ecological intensification of agricultural systems, an approach that aims to enhance ecosystem services such as pollination and crop pest management across commercial farms. 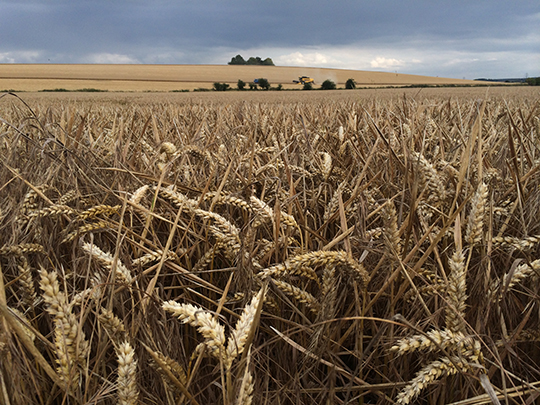 The research team, led by Professor Richard Pywell of the Centre for Ecology & Hydrology, removed lower yielding and awkward field edges and corners from food production in order to create wildlife friendly habitat on a 900 ha commercial arable farm in central England.

Habitat enhancements included small patches sown with wildflowers, legumes and grasses to provide flowers for pollinators and refuges for predators of crop pests.

The researchers found that over six years the yield improvement for wheat and oilseed rape at least compensated for the loss of land for wildlife, and in the case of field beans resulted in greater yield.

According to Professor Pywell, “replacing the worst performing parts of the fields in this way appears to have a positive, spill over effect.

“At the field-scale, yield was neutral in wheat and oilseed rape fields but critically, performance of field beans - an important protein crop - was 25-35% higher where habitats were created.”

The researchers recorded significant increases in the numbers of bumblebees (important crop pollinators) and ground beetles (important predators of crop pests) where wildlife habitats were created.

Importantly, the researchers concluded that there was no overall effect of removing poor yielding land on farm profitability or the nutritional energy produced.

The study also found that these beneficial effects on crop yield took around four years to manifest themselves.

“Our study supports the argument that lower yielding and otherwise compromised areas of fields can be better used as non-crop habitats to provide services supporting crop production, benefits for farmland biodiversity, and the protection of water and soil resources.” Prof Pywell said.

Further research is needed to determine the right amount and combination of habitat required at the farm and landscape-scale to increase yield, yet leave sufficient land for food production.

Better engagement and training of farmers will also be essential for the delivery of more demanding and complex wildlife habitats, Prof Pywell concluded.

“Our study supports the argument that lower yielding and otherwise compromised areas of fields can be better used as non-crop habitats to provide services supporting crop production, benefits for farmland biodiversity, and the protection of water and soil resources.” Prof Richard Pywell

This farm-scale experiment provides a clear demonstration that wildlife-friendly management that support ecosystem services are compatible with commercial arable farming. The implications for future agri-environmental policy are discussed.