Drought frequency may increase by more than 20% in some regions of the globe by the end of the 21st century, but it is difficult to be more precise as we don’t know yet how changes in climate will impact on the world’s rivers. 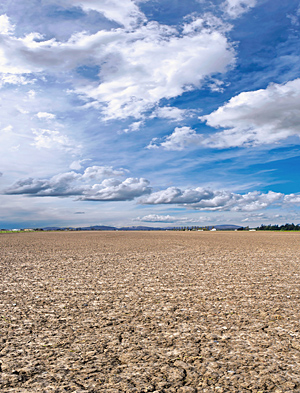 The results come from a study, published this week in Proceedings of the National Academy of Sciences (PNAS), which examined computer simulations from an ensemble of state of the art global hydrological models driven by the latest projections from five global climate models used for the fifth assessment report of the Intergovernmental Panel on Climate Change.

The research was led by Dr Christel Prudhomme from the UK’s Centre for Ecology & Hydrology working with colleagues from the UK, USA, the Netherlands, Germany and Japan.

Increasing concentrations of greenhouse gases in the atmosphere are widely expected to influence global climate over the coming century. The impact on drought is uncertain because of the complexity of the processes but can be estimated using outputs from an ensemble of global hydrological and climate models.

The new study concluded that an increase in global severity of hydrological drought - essentially the proportion of land under drought conditions - is likely by the end of the 21st century, with systematically greater increases if no climate change mitigation policy is implemented.

Under the ‘business as usual’ scenario (an energy-intensive world due to high population growth and slower rate of technological development), droughts exceeding 40% of analysed land area were projected by nearly half of the simulations carried out. This increase in drought severity has a strong signal to noise ratio at the global scale; this means we are relatively confident that an increase in drought will happen, but we don’t know exactly by how much.

Dr Prudhomme said, “Our study shows that the different representations of terrestrial water cycle processes in global hydrological models are responsible for a much larger uncertainty in the response of hydrological drought to climate change than previously thought. We don’t know how much changed climate patterns will affect the frequency of low flows in rivers.”

One important source of uncertainty depends on whether the models allow plants to adapt to enriched carbon dioxide atmosphere. If this is accounted for, the increase in droughts due to warmer climate and changes in precipitation is mitigated by reduced evaporation from plants, because they are more efficient at capturing carbon during photosynthesis. The process of plant adaptation under an enriched carbon dioxide atmosphere is currently absent from the majority of conceptual hydrological models and only considered on a few land surface and ecology models.

Dr Prudhomme added, “When assessing the impact of climate change on hydrology it is hence critical to consider a diverse range of hydrological models to better capture the uncertainty.”

The study is to be published in a special feature of PNAS that assembles first results of the Inter-Sectoral Impact Model Intercomparison Project (ISI-MIP), a unique community-driven effort to bring research on climate change impacts to a new level. Dr Douglas Clark of CEH is a co-author on this study and several of the other ten papers published as part of the special feature.