Distribution of British soil bacteria mapped for the first time

Britain’s soil bacteria have been mapped for the first time in the most comprehensive study of a country’s soil biodiversity to date. The results are published today (20 April 2011) in the journal Environmental Microbiology. 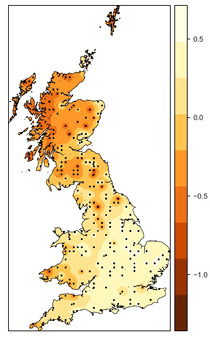 To complete the map the scientific team, from the Centre for Ecology & Hydrology (CEH), Newcastle University and the University of Oxford, analysed over 1000 soil cores from England, Scotland and Wales, examining microbial DNA sequences in the laboratory to map bacterial biodiversity.

The research was carried out using samples collected for the Countryside Survey project coordinated by (CEH).

The study concluded that bacterial diversity was strongly related to soil pH with acidic soils dominated by few taxa (groups of organisms). Below ground bacterial and above ground plant communities were closely related suggesting that soil bacteria are driven by the same ecological processes that govern higher organisms such as plants.

Bacteria constitute a major portion of the biodiversity in soils and play an essential role in maintaining the health of soil processes which underpin many valuable ecosystem services, including crop production and soil carbon storage.

Lead author Dr Robert Griffiths from the Centre for Ecology & Hydrology said, “Until now our understanding of how bacterial communities vary across the landscape has been extremely limited. Our results provide the first large scale assessment of bacterial communities across Britain’s soils and provide a baseline to further explore the complex relationships between soil bacterial biodiversity and ecosystem services. The new research has revealed how microbial distributions in British soils are linked to both soil pH and plant type.“

Co-author Professor Andy Whiteley, also from the Centre for Ecology & Hydrology, said, “People don't really think about bacteria in soils when they walk across a field or a park, they are microscopic and hidden from view, but the numbers are truly impressive; one footprint covers around 10 billion bacterial cells.  Bacteria are central to maintaining essential functions which we take for granted, such as soil fertility and cycling green house gases.”

Professor Whiteley added, “In our new study we’ve pulled back the earth’s skin to reveal how and why bacteria in the soil varies across the landscape.  To our surprise it appears that the same ecological processes that operate above ground, also seem to determine what happens below ground. We’re also beginning to understand the key functions that these hidden communities perform for us.”

Soil samples and DNA used in the study have been frozen providing a resource for future studies looking at the impacts of climate change on diversity and soil processes.

Co-author Professor Mark Bailey, Acting Director of the Centre for Ecology & Hydrology, said, “CEH produced the first British national flood risk map in 1996. 15 years later we’ve produced the first soil microbial map for any country in the world. This year we will make the samples and raw data from the study available to other researchers, allowing the wider community to explore the exact functions that each of the thousands of species in every gram of soil carry out.”

The work was funded by the Natural Environment Research Council.

For press queries, please contact the CEH press office. The Centre for Ecology & Hydrology issued a press release to accompany publication of the paper.